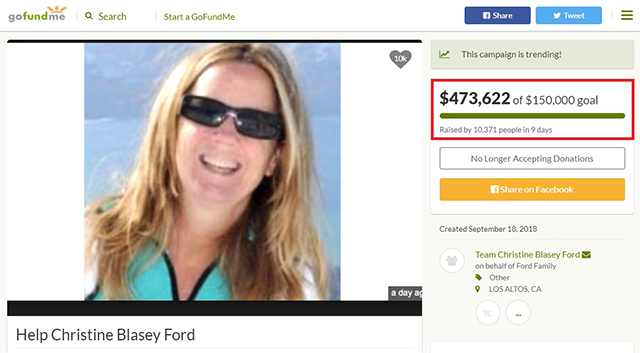 Judge Kavanaugh accuser Christine Blasey Ford has raised over $700,000 through multiple GoFundMe campaigns to cover “expenses” related to her testimony. A host of other similar campaigns backing Ford raised around another $40,000.

Ford did manage to work a plug in for her GoFundMe campaigns during her testimony:

"Her lawyers have paid for her polygraph … as is routine," Christine Blasey Ford's lawyers tell prosecutor Rachel Mitchell, who is asking questions for GOP members of the Senate Judiciary Committee. pic.twitter.com/R4jCPeX2fH

Hopefully, she can use the funds to buy much-needed coffee!

VIDEO: Christine Blasey Ford gets her request for coffee personally delivered to her by @CoryBooker while she sat at the witness table in front of the Senate Judiciary Committee. pic.twitter.com/HzuymqrDXU

Correction: The “Women Support Christine Blasey Ford” campaign which raised $47,000 is for a “full page USA Today ad” in support of Ford. I’ve removed it from the “other similar campaigns” total above.