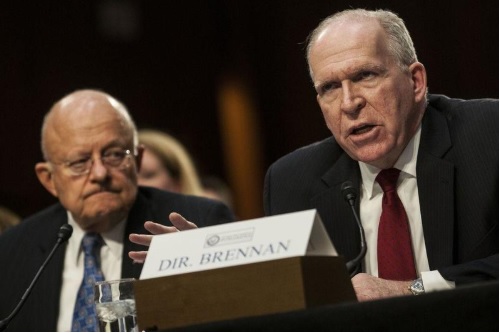 Let the wicked fall into their own nets, while I pass by safely. -Psalm 141:10

The snare that the wicked in government set for President Donald Trump appears as if it is about to ensnare them. As former Director of National Intelligence James Clapper and former Central Intelligence Director and Muslim convert John Brennan get pulled more and more into the expanding Russiagate probe, reports are coming out that CIA analysts who were involved in the assessments regarding Russia’s alleged activities in the 2016 US elections are now lawyering up as a result of Attorney General William Barr‘s expansion of his investigation.

The investigation is being conducted by US Attorney John Dunham.

According to NBC News:

Durham has also requested to talk to CIA analysts involved in the intelligence assessment of Russia’s activities, prompting some of them to hire lawyers, according to three former CIA officials familiar with the matter. And there is tension between the CIA and the Justice Department over what classified documents Durham can examine, two people familiar with the matter said.

With Barr’s approval, Durham has expanded his staff and the timeframe under scrutiny, according to a law enforcement official directly familiar with the matter. And he is now looking into conduct past Donald Trump’s inauguration in January 2017, a Trump administration official said.

One Western intelligence official familiar with Durham’s investigation leaked that Durham has been asking foreign officials questions related to former Trump campaign aide George Papadopoulos, who was fed the rumor that Russia had ‘dirt’ on Hillary Clinton by a Maltese professor, Joseph Mifsud. While US media has sought to portray Mifsud as a Russian asset, the self-described member of the Clinton foundation has far stronger ties to the West.

A Western intelligence official familiar with what Durham has been asking of foreign officials says his inquiries track closely with the questions raised about the Russia investigation in right-wing media—a line of inquiry based on accusations made by George Papadopoulos. https://t.co/pku50keorJ

According to congressional testimony given by Papadopoulos last October as well as statements he’s made over Twitter, the whole thing was an FBI setup – as a ‘woman in London, who was the FBI’s legal attache in the UK’ and “had a personal relationship to Bob Mueller after 9/11” was the one who recommended that he meet with Mifsud in Rome.

To be clear: a woman in London, who was the FBI’s legal attaché in the U.K., and had a personal relationship to Bob Mueller after 9/11, encouraged me to meet Joseph Mifsud in Rome in March 2016 and introduced Bruce Ohr to the top U.K. prosecutor 4 days before the Trump tower mtg.

As the theory goes; Mifsud, a US intelligence asset, feeds Papadopoulos the rumor that Russia has Hillary Clinton’s emails shortly after he announces he’s going to join the Trump campaign. Papadopoulos repeats the email rumor to Australian diplomat Alexander Downer, who alerts Australia’s intelligence community, which notifies the FBI, which then launches operation “Crossfire Hurricane” during which the FBI sent multiple spies (including a ‘honeypot’) to infiltrate the Trump campaign. Notably, former FBI employee Peter Strzok flew to London to meet with Downer the day after Crossfire Hurricane was launched – while Strzok’s boss, Bill Priestap was in London the day before the Downer-Papadopoulos encounter.

We have now pinned Peter Strzok’s boss, Bill Priestap, in London the week of May 6th, 2016 and on the 9th. The day before Alexander Downer was sent to spy on me and record our meeting. Congress must release the transcripts and embarrass the deep state.

And if this is all true, Durham has a lot to untangle – including the Clinton / DNC-funded Steele Dossier.

I believe it is true, and it wouldn’t take much to untangle this at all if people were serious about doing so. The question is, will this all be for political theater or will it actually lead to indictments and justice? Again, call me a cynic, but until I see results, I’m going to assume it’s more DC WWE.