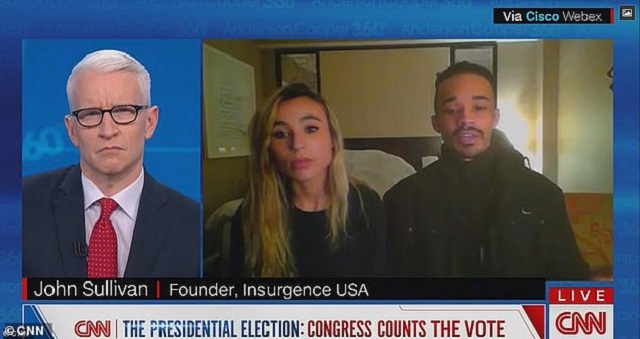 CNN and NBC both paid “insurgent” and provocateur John Sullivan $35,000 for footage he took inside the Capitol building, The Daily Caller reports.

A left-wing activist facing criminal charges for his involvement in the Capitol riots received $35,000 from both CNN and NBC for footage he recorded of a Trump supporter being fatally shot inside the Capitol building, according to records he filed in federal court on Tuesday.

Lawyers for John Sullivan, a 26-year-old Utah native, disclosed the payments as part of the activist’s argument that he was acting as a journalist in the Capitol rather than a rioter.

“Defendant is legitimately self-employed as a documentarian and it is oppressive to require that he not be allowed to continue his primary area of employment for an extended period of time,” Steven R. Kiersh, the Sullivan lawyer, wrote in a court filing in which he argued for Sullivan to be allowed to continue using Facebook and Twitter.

Sullivan, who founded the social justice group Insurgence USA, was charged on Jan. 13 with illegally entering the Capitol, civil disorder, and violent or disorderly conduct on Capitol grounds.

Prosecutors cited video that Sullivan recorded inside the Capitol in which he called for burning down the building, while egging on others who had broken into the building.

“We accomplished this shit. We did this together. Fuck yeah! We are all a part of this history,” he said in a video cited by prosecutors.

“Let’s burn this shit down,” he also allegedly said.

[…] Sullivan’s lawyers filed invoices from CNN and NBC showing he was paid $35,000 for rights to air the footage. Sullivan also received $5,000 from a company called Left/Right Productions and $2,500 from Australia’s ABC, according to the records.

Sullivan appeared for an interview with CNN’s Anderson Cooper after the shooting, in which his footage was aired.

Sullivan is on tape calling for violence and smashing a window inside the Capitol building and many suspect he’s an agent provocateur or a government informant:

I studied video shot by Sullivan (Jayden X) in the Capitol and compiled some moments of him zealously celebrating the invasion & instigating the mob all the way up to Ashli Babbit's shooting. Watch with audio on.

No committed BLM activist would say or do this – and he isn't one pic.twitter.com/uE5VmUf6mU

BLM inc. threatening to “rip the president out of the White House”

They say they won’t wait until the next election.

They’re openly calling for a revolution.

This is domestic terrorism on full display, out in the open. They don’t even try to hide it. pic.twitter.com/OyhNSzBEwu

Seated w/Sullivan on CNN is Jade Sacker, a photojournalist who followed him into the Capitol to film his exploits as part of a documentary project. Here she's heard congratulating him – "We did it!" – and he says, "Is this not gonna be the best film you've ever made in yr life?" pic.twitter.com/KWLVfgKPA7

Both CNN and NBC have been labeling the Capitol protest an “insurgency” and calling for participants to be treated as domestic terrorists — and yet they paid one of the main provocateurs $70,000 and CNN even promoted him on air!