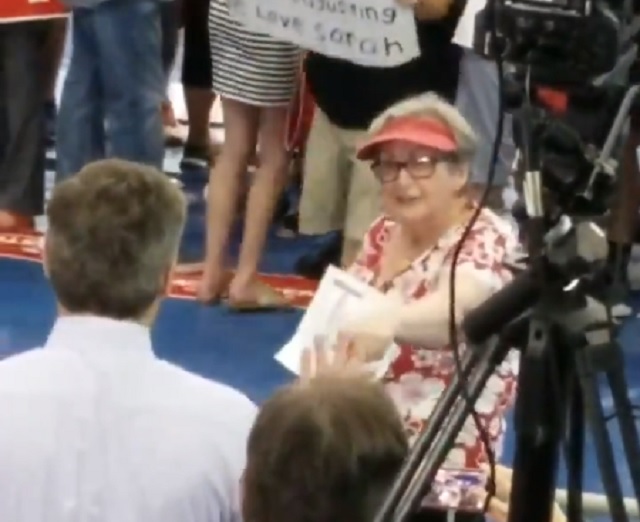 CNN’s Jim Acosta’s “life was in jeopardy” when he was being called fake news by a bunch of old ladies in Tampa, Florida during President Trump’s epic rally earlier this week, so says CNN’s April Ryan.

Acosta, who was heckled with “CNN sucks!” chants before Trump appeared on stage, has said he did not feel like he was in America and expressed that he is “very worried that the hostility whipped up by Trump and some in conservative media will result in somebody getting hurt.”

“That’s a serious moment and a serious place. And Jim Acosta’s life, in my opinion, was in jeopardy that night,” Ryan told CNN host Don Lemon on Wednesday evening. “There was a safety issue.”

[…]Ryan, though, said Trump “has stoked the flames for reporters to feel like they are in jeopardy.”

“Their lives, their safety is in jeopardy. Their lives are in jeopardy at these rallies,” Ryan insisted. “And something has got to stop.”

When Lemon said “many journalists” need security now because of Trump’s rhetoric, Ryan replied: “I am raising my hand. I am one of those.”

Trump supporters are violently attacked every week just for wearing MAGA hats and supporting the president of the United States, and that’s entirely due to the climate of hate the fake news media created. Acosta and his fellow propagandists couldn’t care less.

Breitbart just last month compiled a list of 542 such attacks and harassment incidents.

Just three days ago the story of a liberal lunatic ramming her car into a Trump supporter’s SUV because he had a Trump bumper sticker went viral:

It was only two years ago when an anti-white racist whose head was filled with CNN’s Black Lives Matter propaganda shot and killed five police officers in Dallas.

As Dallas Police Chief David Brown said at the time, the shooter said he was “upset about Black Lives Matter” and the “recent police shootings” and wanted to “kill white people” and “white police.”

The whole Black Lives Matter movement, which CNN pushed more than anyone else, was based on fake news and outright lies and got hundreds if not thousands of innocent white people attacked and killed. All they care about is seizing back power for their globalist overlords.