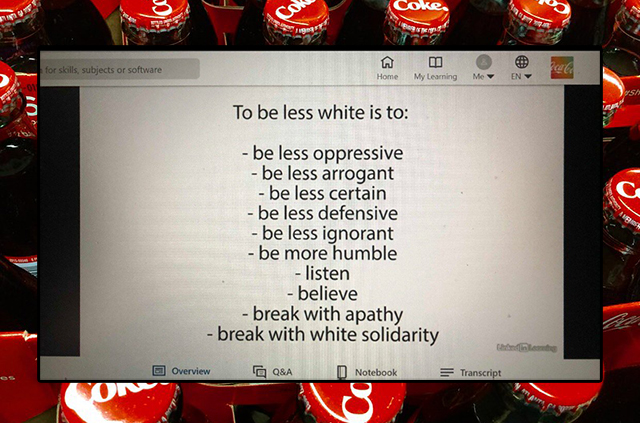 A whistleblower has leaked screenshots of an online training course Coca-Cola employees are allegedly being forced to take which tells them to “try to be less white,” according to Dr Karlyn Borysenko.

The course, which appears to be from “White Fragility” author Robin DiAngelo, says that “to be less white” is to “be less oppressive,” “be less ignorant” and to “break with white solidarity.”

🚨🚨🚨 BREAKING: Coca-Cola is forcing employees to complete online training telling them to "try to be less white."

These images are from an internal whistleblower: pic.twitter.com/gRi4N20esZ As Tucker Carlson noted last year, DiAngelo’s book is “poisonous garbage” which can be summed up in four words: “White people are racist.”

“Not just racist white people,” Carlson said. “All white people. Whether they’re six years old or 100 years old, all of them are by definition racist. They are racist because they are white. Only white people are racist. No one else is.”

"The real point of her book is to defeat & demoralize you."

"Everything about 'White Fragility' is poisonous garbage." pic.twitter.com/4lkyz57ROQ

DiAngelo’s book states that “a positive white identity is an impossible goal.”

“White identity is inherently racist,” DiAngelo says. “White people do not exist outside the system of white supremacy.”