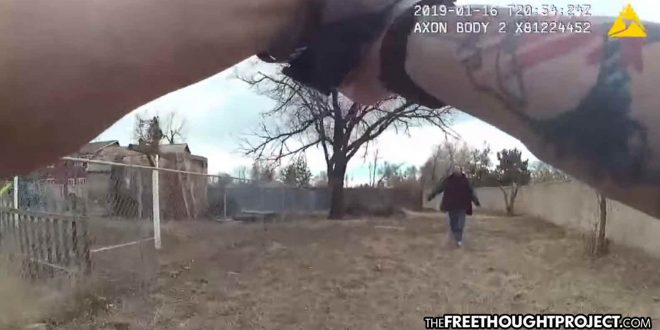 Fort Lupton, CO — In 2019 alone, cops in Colorado shot or killed a total of 67 citizens. Out of those 67 citizens shot or killed, only one cop faced any repercussions. Officer Zachary Helbig was charged with manslaughter last year after he shot and killed an unarmed man for absolutely no reason. Sadly, however, because people are blinded by the sheen of the badge, last week, a jury acquitted Helbig for executing Shawn Billinger on Jan. 16, 2019.

After the killer cop was acquitted, the body camera footage from that day was released. It is nothing short of shocking and raises serious questions as to how on earth a jury could acquit him.

On that fateful January afternoon, Helbig responded to a call at a Shell gas station. The reason for the response remains sealed, however, the video shows Billinger was not a threat and was unarmed when Helbig executed him.

As the video shows, Helbig is interviewing individuals at the gas station before driving after Billinger. The woman appears to be Billinger’s girlfriend and is telling the officer she is upset that they broke up. She then points to Billinger who is driving by in his van. Helbig then gets in his cruiser and pursues Billinger.

When Billinger gets out of his van he walks behind a house. When Helbig confronts him, Billinger begins walking toward Helbig saying “kill me.” Helbig, who was apparently so scared of the unarmed mentally ill man his only option was deadly force, quickly obliged and murdered him on the spot. He never once attempted less lethal force. He simply killed a man because he was scared.

The case was so egregious that Helbig was quickly indicted the following April. The indictment said Helbig fired one shot at Billinger, hitting him in the chest. He was pronounced dead at the scene.

“The defendant acted recklessly with respect to his conduct described above and was not justified in the actions he took pursuant to the affirmative defenses of deadly force in the defense of a person and peace officer’s use of deadly physical force,” the indictment said.

Helbig’s police union-appointed attorney disagreed and claimed that Helbig is trained to kill unarmed mentally ill people who walk toward him. Seriously.

“The truth is, he did what he was trained to do,” Gary Lozow, Helbig’s defense attorney, told the jury, pausing silently for 10 seconds to demonstrate his point. “He acted in self-defense. He did what he needed to do to save his life.”

Exactly how this attorney could argue that Helbig acted in self-defense is a mystery. Never was Helbig’s life in danger. We have no idea whether or not Billinger would have tried to hurt the cop because he was killed 20 feet away.

Nevertheless, the jury bought this nonsense hook, line, and sinker.

“I don’t know what funeral we’d be at if Helbig did that,” the attorney added.

How about no one’s funeral? Had this officer had a single ounce of courage, he would’ve at least attempted to use his taser or baton first. He could’ve simply backed up too.

The District Attorney disagreed with the defense and pointed out how this cop getting away with murder is not okay.

“What do you expect from law enforcement before they take a life?” Weld County District Attorney Michael Rourke said. “That can’t be the standard in this community.”

Rourke argued, quite accurately that Helbig never needed to be in a life or death situation. The officer had “every opportunity to create time and distance.” Helbig knew backup was coming.

“Why not stop there and assess the situation?” Rourke asked the jury.

Sadly, however, Helbig didn’t stop there and because of his cowardly actions a family now mourns the loss of their loved one.

In a statement, the Billinger family said “Shawn was a man in crisis. He was mentally ill. Shawn did not have to die on January, 16, 2019. Shawn was a dad, grandpa, brother, son and friend. He is missed by all who loved him.”

As you watch the video below, remember the statement from Helbig’s attorney and let it sink in. The attorney argued — successfully — that Helbig, a police officer, is trained to kill unarmed individuals who walk toward them. A disturbing idea indeed.