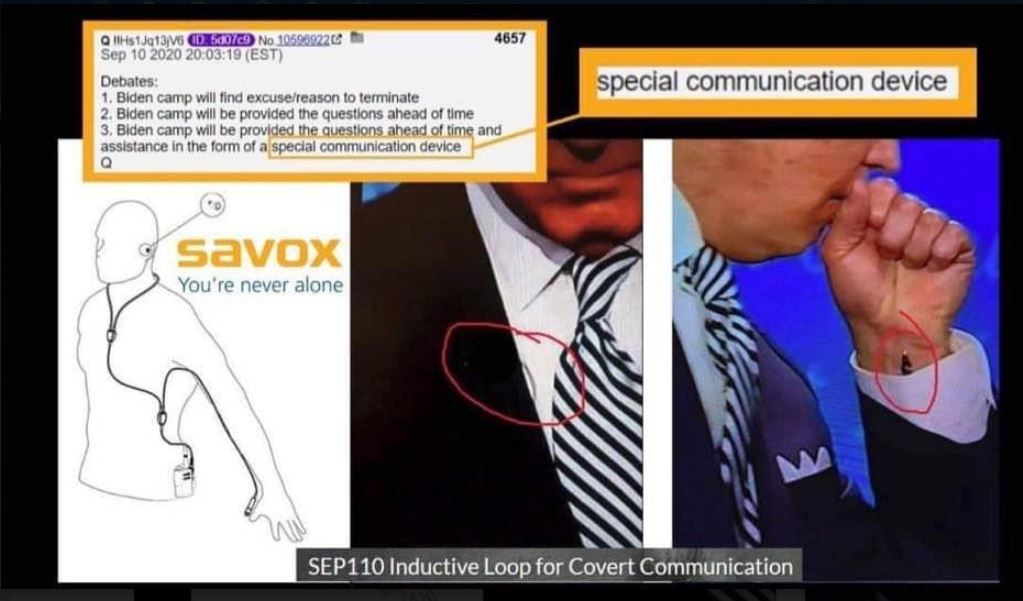 (Natural News) Have you wondered why Biden kept looking down most of the debate, even though he had no notes? He was concentrating on what his advisors were telling him, over the wire. Make no mistake, while Trump was talking and arguing with Wallace, Biden was being told exactly what to say next, word for word. This must be called out at the very beginning of the next debate, and Trump may even demand jackets be opened, sleeves rolled up, and ear holes examined. This is how Biden prevented most off his own gaffs, even though he told lie after lie, knowing fake news would back him up on all of it, but then this happened.

There is video and photographic proof Joe Biden wore a special communication device with an inductive loop (hidden wire) during the entire first Presidential debate. In fact, you can see the inductive loop protruding from his sport jacket near the lapel on his right side, and you can see the communication device extend at his inner wrist of his left hand, when he was told to turn and “fake one cough if you can hear us okay.” The Biden debate cheat team was out in full force, and they’ll do it again next debate, unless they get called out by Trump, live.

The swamp monsters are sinking fast in their own quicksand. They are living in ultimate desperation, knowing so many at the top are going to federal prison for some long stints if Trump is reelected next month. Here’s the moment of revelation, when Biden screws up for just a split second, live in front of the world, and reveals the wire to his cheating team’s advice. Watch closely.

Yes, a photo is worth a thousand words, but a live video feed that’s recorded is the tell-tale proof of all. For all the lies the Democrats tell and scrub from the internet later, so their base will never know, this one got busted, got out and got out fast.

Knowing Biden cannot debate, think straight or speak without tossing word salads, racist gaffs and statistical lies around, there is a 100 percent chance he will be wired to cheat again at the next debate.

That is why Trump needs to open the debate like this: “Sleepy Joe, I would like to thank you and your whole team, who’s speaking into your ear and out of your mouth, for being so slick at the last debate. Tonight, I ask that you open your jacket, roll up your sleeves, and show the camera your ears, to prove that you’re not wearing a special communication device kit, like you did last time. We know, because we have you on video.”

The gig is up — force Sleepy, Sleazy, Sneaky Joe to open his jacket before the debate begins to reveal his debate cheat device

Biden has already been busted wearing earpieces so his team can feed him lines during town hall meetings, virtual meetings, basically everywhere he goes. He often asks his cheat team to turn up the volume, while he fiddles with his ears waiting for words that actually make sense to Americans.

Don’t forget, the Biden camp REFUSED any type of third-party inspection for communication devices just days before the debate. Remember? This is why. If it’s just a “baseless conspiracy theory,” then it can be easily debunked live at the beginning of the next debate. Simple as that. It will only take 10 seconds for Biden and Trump to open their jackets, roll up their sleeves, and let the cameras zoom in on their ears from the side. Just as people are checked by metal detectors and pat downs for weapons at the door, let’s check for ‘weapons of mass destruction’ (Biden cheating his way into the White House) at the debates. The Left is dying to install Communism in America, and destroy the middle class, gun rights, freedom of press, freedom of religion and freedom to criticize the government, just like in China right now.

This is a covert operation to steal the election. The Left needs covert spying, listening and communication devices. Here’s one brand of the device the Biden team used if you’d like to know more about the Democrat’s cheating schemes. Using a clarity, interference-free microphone system, complete with neck loop and discrete wireless earpieces, Biden’s advisors (who aren’t senile like him) were able to review every statement with him before he spoke, tell him what NOT to say, tell him when to smile and laugh things off, and prepare him so he sounded, at the least, functional. 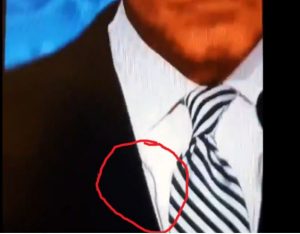 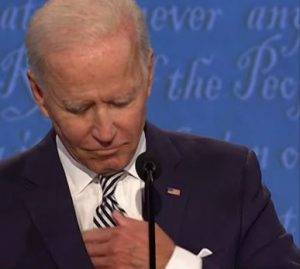 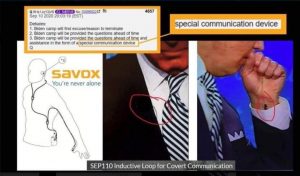 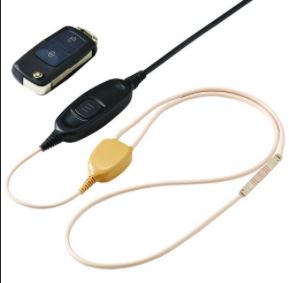 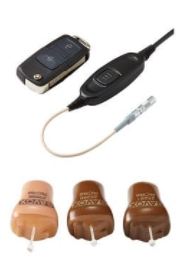 The cheat kit includes a wireless receiver module and a disguised wireless car key fob for use with the wireless earpieces. This high tech innovation provides interference-free communication that’s encrypted. It comes with volume control and is compatible with all the top PTT applications. Here’s how the whole debate cheat kit is set up for Biden backstage:

Tune your internet dial to Trump.news for updates on the Biden’s sneaky, sleezy camp, cheating while they all sink in quicksand in their own swamp.