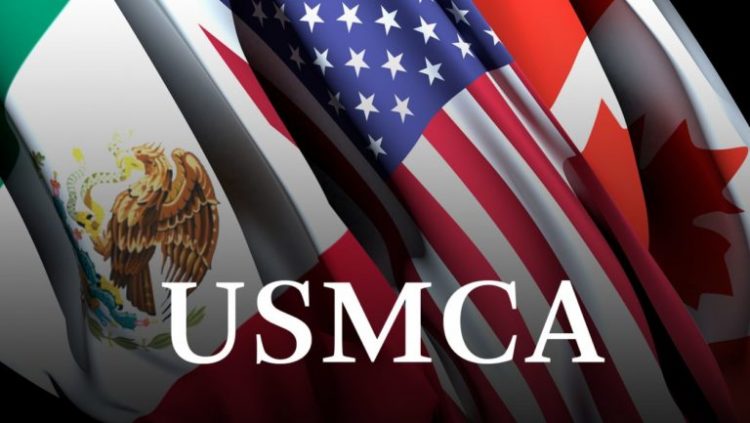 The Globalists have long been in the process of setting up a dictatorial and totalitarian oligarchy over the United States. Now they are putting the last pieces in place. That is what is behind the pushes for the USMCA “Trade Agreement”, an Article V convention, and red-flag and other laws to disarm the American People. The Globalists want to move the United States into the North American Union.

The USMCA “Trade Agreement” is, in reality, a Transfer of Sovereignty Agreement. It provides for the economic and financial integration of Canada, the United States, and Mexico. In addition to putting the three countries under global regulation of a host of issues such as patents, environmental regulation, labor, immigration policy, prohibition of discriminatory practices respecting sexual preferences and “gender identity” in the workplaces; 1 it puts the International Monetary Fund (IMF) in control of our economy and binds us to submit to an international monetary system which is to be administered and enforced (at least initially) by the IMF and which will replace our collapsing Federal Reserve system.2

Every word, clause, sentence, paragraph, page, chapter, and appendix of the USMCA “Trade Agreement” is in blatant violation of our Declaration of Independence and Constitution.

The North American Union brings about the political integration of Canada, the United States, and Mexico. The Task Force Report on Building a North American Community [link] sponsored by The Council on Foreign Relations provides for (among other horrors):

To merge the functions of our police and military and combine it with those of Canada and Mexico; 4 and to permit a Parliament to be set up over and above the United States, is altogether repugnant to our existing Constitution. But this is what the Globalists and the Political Elite of both parties want. Before they can impose it on us, they need to get a new Constitution for the United States.

And that’s the purpose of an Article V convention – to get a new constitution for this Country which legalizes the USMCA “Trade Agreement” and transforms the United States from a sovereign nation to a member state of the North American Union.

But Americans don’t want another constitution, and they don’t want to be moved into the North American Union.

So! Some of those pushing for an Article V convention, such as the “Convention of States Project” (COS) are marketing a convention to appeal to conservatives. COS and their allies such as Mark Levin claim to be for limited government and say they want a convention to get amendments to “limit the power and jurisdiction of the federal government”. Sadly, those who don’t know that our Constitution already limits the power and jurisdiction of the federal government to a tiny handful of enumerated powers [they are listed on this one page Chart] fall for the marketing.5

This Flyer shows why Delegates to an Article V convention (called for the ostensible purpose of proposing amendments to our existing Constitution) have the right and power to ignore their instructions and impose a new Constitution which puts us under a completely new Form of government – such as the North American Union.

When Americans finally see what has been done and how they have been deceived, they will be angry. That’s why they must be disarmed now. But all federal gun control laws for the Country at Large are unconstitutional as outside the scope of powers granted to Congress; as in violation of Article I, §8, clauses 15 & 16; and as in violation of the Second Amendment. And any pretended State law which contradicts its State Constitution or which interferes with Congress’ power (granted by Art. I, §8, cl. 16) to “organize, arm, and discipline, the Militia”, is also unconstitutional [link].

Red flag laws also violate the privileges and immunities clause of Article IV, §2; and the due process clauses of the 5th Amendment and §1 of the 14th Amendment. US Senator Marco Rubio’s (Fla.) malignant red flag law [link] appropriates a total of $100 Million to pay to States and Indian Tribes which pass the red flag legislation set forth in Rubio’s bill.

Stop the Globalists: Oppose the USMCA “Trade Agreement” and an Article V Convention

While the Trump Administration hammers the Globalists’ nails into our coffin, his trusting supporters censor criticism of the USMCA “Trade Agreement” – even though the Agreement is so long and incorporates so many other Agreements it is unlikely that any of them (including Trump) have read it.

And demagogues in the pay of Globalists have convinced constitutionally illiterate Americans that the solution to all our problems is to get an Article V convention.

1 Christian Gomez: USMCA and the Quest for a North American Union & What’s Really in the USMCA? Publius Huldah: The USMCA “Trade Agreement” violates our Constitution and sets up Global Government.

2 Publius Huldah: So You Think Trump Wants To Get Rid Of The Fed?

3 Meanwhile, the UN is building a global military & police force. See “United Nations Peacekeeping” [link] and think of the ramifications of such a militarized global police force. Who will be able to resist?

4 Mexico’s culture is notoriously criminal. If we permit Globalists to get an Article V convention and a new Constitution which moves the United States into the North American Union, you can expect to see militarized Mexican police operating within our [former] Country. And soon, they will be wearing blue helmets.

5 It is possible that Mark Levin and the hirelings promoting a convention (such as Mark Meckler, 6 Tom Coburn [link], and Jim DeMint [link]) don’t know what the actual agenda is. And it is almost certain that COS’s constitutionally illiterate celebrity endorsers and lemmings don’t know. People who don’t know that our Constitution already limits the federal government to a tiny handful of enumerated powers, and that our problems are caused by ignoring the Constitution we have, are easily deceived by the ridiculous claim that we must amend our Constitution to make the federal government obey it.

Our Framers always understood that the purpose of an Article V Convention is to get a new Constitution [link]. This is why James Madison, Alexander Hamilton, and four US Supreme Court Justices, among others, warned against it [link].

6 It is the Globalists, primarily the Kochs and George Soros, who are funding the push for an Article V convention. See, e.g.,

7 The transfer of power from our federal government to global government by means of the USMCA “Trade Agreement” is illustrated here.