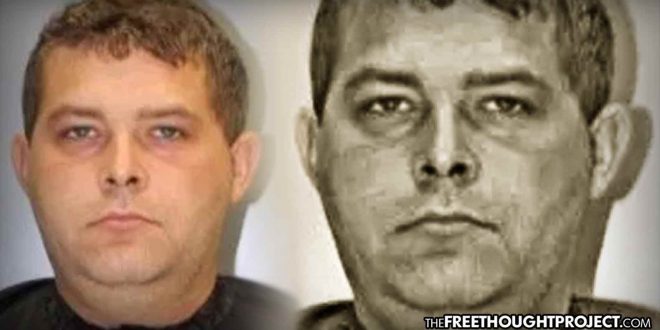 Richland County, SC — Police officers, we are told, are here to enforce the law and “protect and serve” the communities in which they work. While many of the folks who choose this career path follow through with their responsibilities, others seek out this job to use it to dominate and exploit others. Richland County Sheriff’s Deputy Derek Vandenham is one of these cops who allegedly used his power to prey on a vulnerable children. This cop’s addiction to underage sex was so strong that he was caught on duty, in uniform attempting to meet a child for sex.

Vandenham was one of several people arrested last week in an undercover sting operation — which happened to be set up by his own department — to catch child predators. Deputies from the Richland County Sheriff’s office went undercover on social media and online chat rooms as children. They tricked predators into meeting up with them and would make the arrest when the predators showed up. Vandenham was one of these sickos who showed up.

Sheriff Leon Lott held no punches when calling out his deputy for his sick behavior, noting, Vandenham was “working, on duty, in my car, in my uniform … and was communicating to have sex with a 15-year-old.”

“One of the most disgusting things that I’ve been having to deal with is to have a deputy do something like this,” Lott told reporters during a press conference on Tuesday.

In a statement to NBC News, Lott said he would recommend that Vandenham’s “certification be revoked so he never works in law enforcement again.” Hopefully that would happen without Lott’s recommendation, however, as this officer attempted to meet a child for sex and has no business having a badge and a gun.

During the press conference, Lott explained how these “monsters” live among them and go to the same churches and even serve on his department, which is why this work is so important.

“Unfortunately, some of them we work with, like a deputy sheriff at Richland County Sheriff’s Department, some of them we go to church with,” he said. “But we’ve got monsters that live in our community and they prey on our children and our job is to protect our children.”

For attempting to have sex with a child, Vandenham has been charged with soliciting a minor and attempted criminal sexual conduct with a minor.

Lott said he would recommend that Vandenham’s “certification be revoked so he never works in law enforcement again.”

Police officers soliciting children for sex online is not all that uncommon. In fact, police officers, high-level military, and political officials are captured in these stings all the time.

TFTP just reported on a case out of Florida in which another cop was caught attempting to lure a real girl and there was no sting to catch him. Luckily, the girl’s mother was vigilant and caught this monster before he made physical contact with her young daughter.

As TFTP reported, an Okaloosa County sheriff’s deputy has been fired and arrested after the mother of a 9-year-old girl caught him trying to lure her daughter to rape her. The cop, Cansas Sadler Jr., 41, is also a married father who has two daughters.

According to the Miami Herald, Okaloosa has him for two counts of using a computer to solicit a child and using a two-way communications device to facilitate a felony. Polk has him for multiple counts of transmission of material harmful to a minor by electronic device, according to deputies.

These cases and others like them should serve as a wake up call to parents who let their young children play unsupervised on electronic devices. This innocent 9-year-old girl was playing a simulation game called ‘the wolf,’ which she unsuspectingly thought was harmless. However, a child predator found her through it.

Sheriff Judd said his message to parents is simple: “If you’re going to allow your 9-year-old to have a phone that connects to the internet, that connects to gaming apps, you’ve got to know what they’re doing,” he said. “These worthless deviants are online looking for your children.”

More Cops Caught With Their Pants Down: