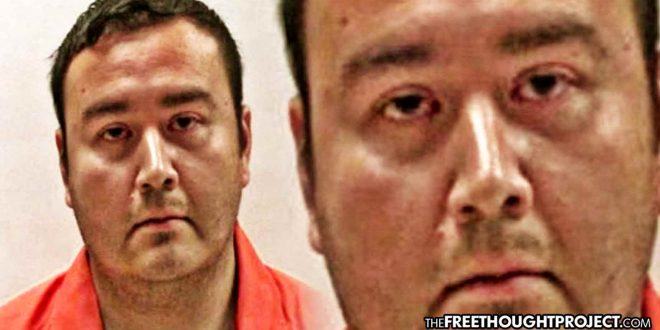 Primera, TX — A disgraced cop from the Primera Police Department has been handed down a significant sentence this month after pleading guilty in an utterly disturbing case. Ex-officer Joel Alex Sandate, 32, was sentenced to ten years in a cage after admitting to installing hidden cameras to record a child undress in her bedroom. Had it not been for a random act in the department locker room, this monster may have never gotten caught.

Imagine going to work and randomly finding an SD card on the floor. When you put that SD in your computer to see what is on it, you find disturbing videos of a child undressing in her bedroom. Well, that is exactly what happened to a cop in Texas who discovered that one of his fellow officers was secretly recording a child in her own bedroom.

According to the plea agreement, a fellow cop was getting dressed in the locker room and found the “micro SD card” on the floor. Not knowing who it belonged to, he put it in a card reader:

The officer used a card reader to view the videos of the ADATA Micro SD Card and viewed what appeared to a be a minor female in a bedroom in various states of undress. The officer then saw a video of what looked like fellow police officer JOEL ALEX SANDATE looking into the lens of the camera and adjusting the angle of the camera after looking back and forth to his phone and the camera lens. Officer Lopez reported the contents of the ADATA Micro SD Card to Special Investigations Unit with Cameron County District Attorney’s Office who then obtained an arrest warrant for JOEL ALEX SANDATE.

After he was arrested, a search warrant turned up multiple hidden cameras in the bedroom of the child once authorities found out who she was. They also found more cameras in the officer’s personal vehicle.

According to Department of Homeland Security agents, videos found on Sandate’s devices dated back two years meaning he began recording his victim when she was just 12. The most recent videos, according to the DHS, “depicted a minor female (age 14) in various states of undress” on the defendant’s nefarious collection of cameras, cell phones, and storage cards, the plea agreement also states.

“The videos met the statutory definition of child pornography pursuant to Title 18 U.S.C. Section 2256(8)(A),” according to the document.

While this case is certainly shocking, the real shocking truth is the fact that TFTP has reported on several instances of cops doing this exact thing — within the last ten months.

As we reported in February, a top cop with the Weber County Sheriff’s Office was arrested and charged with utterly disturbing crimes for spying on the little girl. Marc Swain, 47, is a crime scene investigator with the sheriff’s office who found himself on the other side of the law after his arrest on multiple counts of voyeurism and sexual exploitation of a minor.

Swain is accused of hiding a recording device in a bathroom used by a 12-year-old girl. The girl told her parents about the camera after she noticed a camera lens in various places moving around the bathroom every time she showered. His victim discovered the device herself.

Also, as TFTP reported in December, just like Swain and Sandate, a Mandan police officer in North Dakota set up a camera in the exhaust fan of a bathroom to record a young girl getting in and out of the shower. The person alleged to have put the camera in the fan is 45-year-old Scott Warzecha. Warzecha was the main suspect because the camera in the fan was on a cellphone that belonged to the cop.

According to the Morton County Sheriff’s Office, the girl found the camera after a shower and when she looked on the phone, she found multiple videos of herself showering. The minor told deputies when they reviewed the 15-minutes of video, they could see themselves undressing and getting in and out of the shower.

Warzecha was charged with felony sex crimes against a child — one count of using a minor in a sexual performance and two counts of surreptitious intrusion.