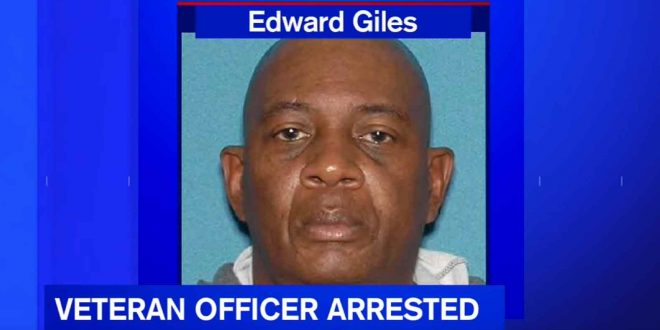 Police Departments are going to have to start doing a better job of having several people to keep each other accountable. It’s stories like Edward Giles that demonstrates that in today’s world, these men cannot be left alone with children in programs like this. Fortunately, he was caught, but how many are not? And how many young boys are scarred for life?

Jack Burns at The Free Thought Project has the story:

East Orange, NJ — A 30-year-veteran police officer has been arrested and charged with raping kids while serving as the youth football director and their coach in the East Orange P.A.L. (Police Athletic League).

Edward Giles was arrested and charged with sexually assaulting two boys but his fellow boys in blue believe there may be an untold amount of victims who have yet to come forward. They’re encouraging members of the public to tell their story if they’re aware of more victims. Anyone with information about Giles having committed more crimes is encouraged to come forward.

As a long-time member of the East Orange Police Department, Giles served as a coach and was a full-time community resource officer. Now he’s being charged with more than a dozen crimes.

Prosecutor Lyndsay Routolo described the perpetrator and how he abused his power and position to victimize kids.

This defendant took advantage of his position of trust in the community as a means to victimize children…We believe that there are likely additional victims yet to be identified, and we are urging anyone with information to come forward and help bring him to justice.

The alleged crimes took place between 1998 and 2003 when the two boys were just 11 and 13 years of age. The alleged sexual assaults took place at the officer’s home on West Fourth Avenue in Roselle.

It’s unclear if Giles abused members of his athletic teams or if the victims were children he was raising as a foster parent. He had been a foster parent for many years and the child currently living with him was taken into protective custody by the Department of Children and Families.

A reward of $10,000 is being offered for information leading to more indictments in the case. Giles is set to go before the judge on Thursday to determine if he will be allowed to bail out or be held without bond.

Also worth noting is that Giles is believed to have sexually molested multiple pre-teen football players over the years but currently those youths have not been identified. They’re encouraged to speak with local police and file a police report.

According to NBC New York, reports can also be made by contacting Crime Stoppers.

The Union County Crime Stoppers are offering a reward of up to $10,000 for information leading to any additional indictments. Tips can be given anonymously by phone at 908-654-TIPS (8477).

Anyone with knowledge of this allegedly perverted cop’s behavior with kids should contact the organization immediately.

As TFTP has reported on numerous occasions, predators often seek out positions of authority over their victims so they can use their position in society to abuse. Not limited to Catholic priests, predators can and do become teachers, police officers, daycare workers, corrections officers, or any other position which will give them access to vulnerable individuals.

Also as TFTP has reported, parents would do well to avoid placing their children in Explorers programs run by police departments targeting youth to supposedly expose them to the field of policing. Unfortunately, if an incident does occur, who would the victims have to report the crimes to? The police of course, and that’s where things get covered up and abuses continue to take place.

Explorer cadets have been exploited from Kentucky to California by pedophiles who masquerade as cops while carrying a badge and gun and the full weight of the law behind their uniforms. Police should stick with crime fighting and leave it to the parents to get their kids involved in safe, extra-curricular activities.

Courtesy of The Washington Standard
Tim Brown is an author and Editor at FreedomOutpost.com, SonsOfLibertyMedia.com, GunsInTheNews.com and TheWashingtonStandard.com. He is husband to his “more precious than rubies” wife, father of 10 “mighty arrows”, jack of all trades, Christian and lover of liberty. He resides in the U.S. occupied Great State of South Carolina. . Follow Tim on Twitter. Also check him out on Gab, Minds, MeWe, Spreely, Mumbl It and Steemit