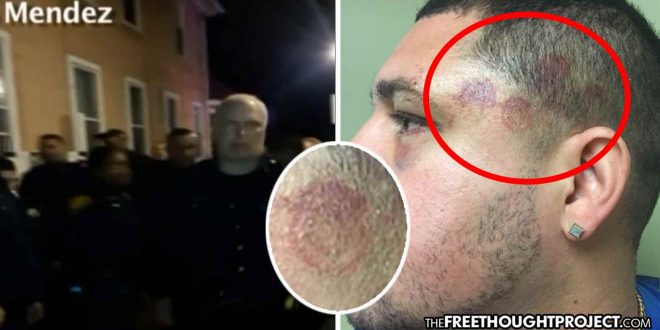 Bridgeport, CT — “These are not just a few bad apples,” said City Council member Maria Perieira when talking about the 17 Bridgeport police officers who descended on a party in 2017 and savagely beat multiple innocent people and lied to cover it up. “It’s clear from the number of settlements there is a systemic problem in the Bridgeport Police Department and that is a reflection on the department’s leadership.”

One of those settlements was approved this week for $340,000. The money will be going to Carmelo Mendez, an innocent man who was viciously beaten by cops for doing nothing other than filming them abuse others.

The incident unfolded over a noise complaint in 2017. Initially, only two officers responded to a call for loud music being played at an outdoor birthday party. But, when party goers and police got into some verbal sparring — never getting physical — those officers called for back up.

“Despite the fact that Police Chief Armando Perez’ evaluation characterized this as a ‘nothing incident,’ officers placed a distress call with dispatch which requires that all officers respond,” the lawsuit stated. “The chaotic events that followed involved 46 police officers, unrestrained, gratuitous violence by numerous police officers, and a failure by veteran officers to de-escalate the unconstitutional actions of officers under their supervision.”

Another 44 cops would show up to the scene. The homeowner, Fernando Morales, said when they additional officers arrived, “they went straight to the backyard, throwing people against walls, putting tasers and guns on me.”

This police violence was captured Morales’ security cameras as well as Mendez’s cellphone.

As the video shows, while cops are attacking people in the backyard, Mendez is filming in the front of the house where his handcuffed mother was being assaulted before he was attacked by multiple officers.

“A few moments later, after Carmelo Mendez videotaped the police aggressively pulling his mother down a flight of steps while handcuffed, several officers engaged in a ruthless beating of Mr. Mendez,” the suit states.

In his lawsuit, Mendez claimed police officers beat him, denied him medical care and arrested him after breaking up a birthday party at his sister’s home. The lawsuit accuses multiple officers of brutality as well as a cover up. As the CTPost reports:

It continues that Officer Adam Szeps then struck Carmelo Mendez and threw him on the ground. Before Mendez was handcuffed, the suit claims, Scillia punched and kicked Mendez while he was lying face down on the ground.

After Mendez was handcuffed, Scillia punched Mendez several times and kicked him again, the suit states.

While Mendez was lying on the ground, Stanitis then struck Mendez in the head several times with an unknown object causing bruising and distinct marks, and officers Hugo Stern, Joseph Cruz and Kenneth Fortes joined other officers in the beating of Mendez before and after he was handcuffed, the suit states.

“The officers collectively inflicted such a brutal beating that it left a tattoo of multiple quarter sized marks on his head that resemble a police badge on a ring, and contusions over his body,” the suit states.

Mendez has the disturbing photographic evidence which shows quarter-sized badge imprints all over his face and body from when he was beaten while handcuffed.

Mendez was beaten so badly that he lost consciousness while being booked into jail on the false charges. He was then rushed to Bridgeport hospital for treatment. According to the lawsuit, Mendez required further medical treatment at the Veteran’s Administration Hospital and sustained scarring to his head, contusions to his head and body, an injury to his eye and suspected traumatic brain injury.

“Defendants Ganim and Perez withheld exculpatory materials of the officers’ falsehoods,” the lawsuit states. “Despite an FOI request fielded by the Connecticut Post, defendants Ganim and Perez conspired to conceal the disclose of such exculpatory materials for several months. After learning of the false report and fictitious criminal charges, defendants failed to remedy the wrong.”

The internal investigation would later find that 17 cops as well as 2 civilian employees used excessive force, lied on official reports and violated a laundry list of department regulations. Two officers were apparently so worried about the results of the investigation that they killed themselves during it. Two police officers cited in the OIA report, Sgt. Mark Belinkie and Officer Thomas Lattanzio, committed suicide before the report was released.

Two years after his beating and false arrest, all charges against Mendez were dropped and now the taxpayers are being held responsible. Below is the video from a news report last year.