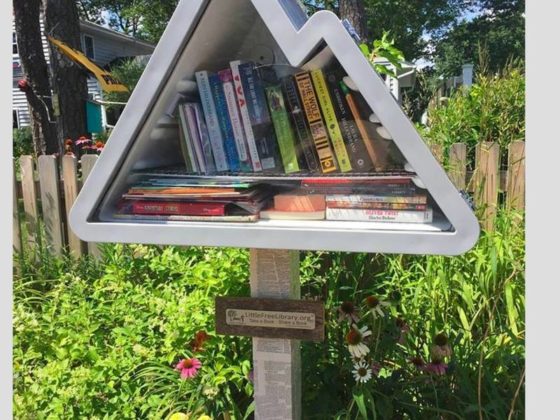 We’re fairly certain that Winston Smith of 1984 had more freedom to curl up with a good book than the kids at Point Pleasant Boro, New Jersey.

Nothing says freedom like having police show up to swat the sharing of ideas and banish the written word.

That’s – quite literally – what happened recently to Grace and Peter Hagemeyer when they erected a small book case at the end of their driveway. Despite hundreds of these things popping up all over the country, police are starting to crack down on them at the behest of city code enforcers. The police and city code enforcers always say that there’s one vague, anonymous complaint that – by Jove! – they must investigate immediately.

Police showed up barely a week after the Hagemeyers placed their mailbox library and ordered it be immediately dismantled, because…. there was an alleged complaint. Unlike when there’s an actual crime taking place, police showed up the day of the complaint to fulfill the bidding of the city. And the next day, city code enforcers did credit to taxpayers by issuing an order for the complete removal of the “structure” within 10 days, in concordance with land-use ordinance, which….wouldn’t you know it – just happens to mention these new lending libraries.

The story from Patch.com says someone called the police on the family, but this writer suspects that it is merely code enforcers sending police to hound such families by making up “the anonymous complaint” because it works. People cow-tow to the almighty complaint. Sadly, police showed up on the day of Hagemeyers’ grand opening of the lending library at their Hardenbergh Avenue home.

Borough officials told News12 that their hands were tied because someone filed a formal complaint.

“No matter how benign or serious an issue is, if a formal complaint goes in to the police department, they have to act on it,” Point Pleasant Boro Administrator Frank Pannucci Jr. told News12.

The Hagemeyers’ first mistake was in their generosity of spirit. But then they acted on by actually crafting a unique and inviting book box and filling it up with literature that would be better off if were burned in a giant pile – as dangerous ideas always should be before they spread. Last but not least, they were naive in thinking that it would benefit children to have their noses in books instead of being glued to smartphones and tablets. They thought it might help grow their minds, or something.

“We live in a great town, on a friendly street,” Grace had said. “This is the kind of community we should be encouraging.”

It’s a good thing police showed up to scare the freedoms away when they did. By the time they broke up the scene, a few neighborhood kids and a teacher had already benefited by relaxing with a book.

Heather Callaghan is an Energy Healer, consultant, independent researcher/writer, speaker and food & health freedom advocate. She is the Editor and co-founder of NaturalBlaze as well as a certified Self-Referencing IITM Practitioner. She has written over 1,200 articles and wants readers to empower themselves to take back their health!