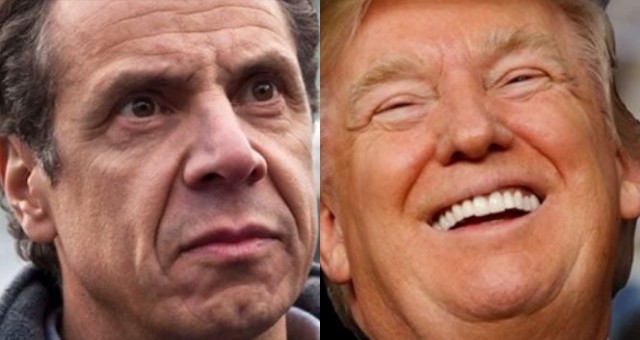 Gov. Andrew Cuomo (D-NY) on Wednesday evening lashed out at President Donald Trump after he signed off on a memo ordering his administration to review potential funding cuts to protest-plagued cities, including Democrat-controlled New York City, Breitbart reports.

“He better have an army if he thinks he’s gonna walk down the street in New York. New Yorkers don’t want to have anything to do with him,” Cuomo said in an apparently threatening manner during a press conference following the review’s approval, a move which was first reported by the New York Post.

This is the United States of America and the democrats have all but declared open war on President Trump and any who believe in him as our President.

“He can’t have enough bodyguards to walk through New York City. People don’t want to have anything to do with him,”~Cuomo

When Cuomo was confronted about his statements, he fired back the following response:

My comment about the president and bodyguards in New York City, all I’m saying is that he is persona non grata in New York City. And I think he knows that. And he’ll never come back to New York, because New Yorkers will never forget how gratuitously mean he has been to New Yorkers and how many times he’s tried to kill the city that gave him his start and birthed him. That’s what I meant about the bodyguards.

As if this couldn’t be more absurd, de Blasio’s press secretary suggested the move was, you guess it … ‘racist.’ 😂

“As much as Donald Trump wants New York City to drop dead, we will never let this stand,” Neidhardt tweeted. “This has nothing to do with ‘law and order.’ This is a racist campaign stunt out of the Oval Office to attack millions of people of color.”

Racist? LMFAO! What a liberal jackass.

Cuomo can change his rhetoric all he wants but it does not change facts and his statement was an indirect threat to the President.