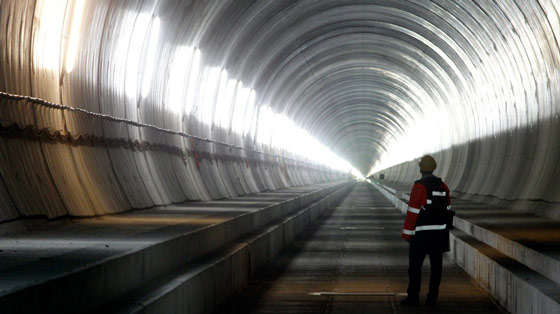 DARPA (Defense Advanced Research Projects Agency) is looking for a large underground facility and they need it within days. Known for their secretive and ominous projects, DARPA explained in a tweet that the ideal location would be “several city blocks with complex layouts and multiple stories.”

Insider Reveals How DARPA Will Control Our Minds: “If Even 20% Of This Is True…”

According to a report by Gizmodo, DARPA sent out a tweet on Wednesday that’s making people a little nervous. The agency wants a large underground facility for “testing” of some sort and they needed it by Friday at 5 pm ET.

A follow-up tweet clarified what exactly the agency is looking for:

The ideal space would be a human-made underground environment spanning several city blocks w/ complex layout & multiple stories, including atriums, tunnels & stairwells. Spaces
that are currently closed off from pedestrians or can be temporarily used for testing are of
interest. pic.twitter.com/GkWKm2w2p9

And just what could DARPA need this for? Who knows…

“DARPA is interested in exploring this domain for researchers to analyze and enhance approaches to improve situational awareness and response times in emergency scenarios,” the DARPA spokesperson continued. “Locations submitted could help the research community identify relevant sites for further field experimentation to accelerate their development of such technologies.” –Gizmodo

That actually brings up more questions than answers. Why would DARPA need an underground facility for “active combat operations?” It makes one wonder who will be the enemy combatant. DARPA is currently hosting the Subterranean Challenge, which is for mapping and traversing underground environments. But the public is already aware of this. DARPA’s “Urban Circuit” challenge is happening in February of 2020, so we can guess that this underground location might be for that, but we don’t know for sure. And it would be strange to only organize something like that on a week’s notice.

DARPA Creepiest Programs For Human Control: “How Dark Will Our Future Be?”

Gizmodo also received an angry email from Jared Adams, DARPA’s Chief of Communications, about the way the media outlet chose to characterize DARPA and their often nefarious experiments. But, as Gizmodo stated: perhaps the communications department should have a word with whoever controls the agency’s Twitter account. We weren’t the ones concurring that its desire for such a quick turnaround sounded “ominous.” And plenty of other news outlets seemed to think it was just as weird and a bit terrifying knowing what DARPA has done in the past.

No one has ever written the history of the Defense Department’s most secret, most powerful, and most controversial military science R&D agency. In the first-ever history about the organization, New York Times bestselling author Annie Jacobsen draws on inside sources, exclusive interviews, private documents, and declassified memos to paint a picture of DARPA, or “the Pentagon’s brain,” from its Cold War inception in 1958 to the present.

This is the book on DARPA–a compelling narrative about this clandestine intersection of science and the American military and the often frightening results.