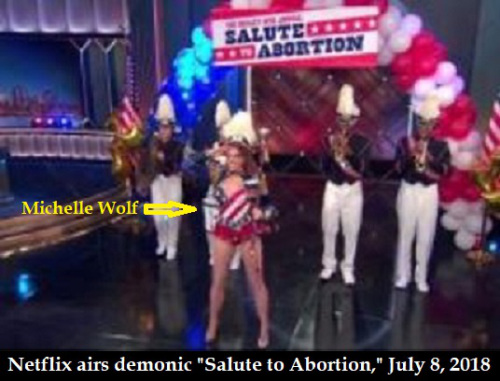 Last Sunday, July 8, 2018, the increasingly-evil media-services provider Netflixactually aired a “Salute to Abortion” at the end of the weekly program, “The Break with Michelle Wolf”.

Wolf is the unfunny so-called comedian who:

As reported by Craig Bannister for CNSNews, Wolf used Supreme Court Justice Anthony Kennedy’s announced retirement to tout abortion rights and demean pro-life Americans, with jokes like: “And, I know, some people call themselves ‘pro-life’- but, ‘pro-life’ is a propaganda term that isn’t real, like healthy ice cream and handsome testicles.”

Wolf then closed her program with a “Salute to Abortion”, draping the American flag over the killing of innocent human beings, and blaspheming “God bless abortion!”.

Wolf marched on stage in a stars-and-stripes majorette’s costume, accompanied by a drum corps and throwing confetti after each of the following declarations:

“Abortion, I salute you!

“Women, if you need an abortion, get one!

“If you want an abortion, get one!

“If you’re not pregnant but you think you eventually might be and want to order a future abortion, get one!

“If you’re pregnant and you want to be pregnant, don’t get one!

“And women, don’t forget: you have the power to give life and men will try to control that – don’t let them!