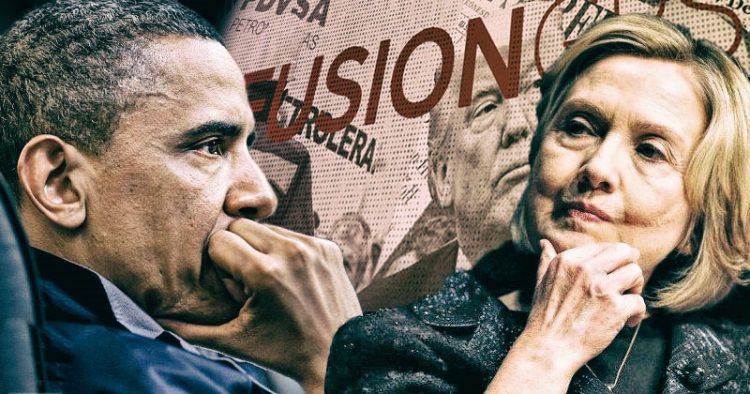 With the release of the transcript of the phone call between President Donald Trump and Ukraine President Volodymyr Zelensky from July 25, 2019, one would think the cries of Democrats for an impeachment inquiry would fall on deaf ears and that they would know the jig is up. Sadly, they don’t. However, we do know that Hillary Clinton was at the center of the call, and as a reporter points out, so were the usurper Barack Hussein Obama Soetoro Sobarkah and Nellie Ohr.

First, Democrats know they have been caught with their pants down and as they attempt to make a fig leaf apron, they appear all the more guilty of the very things that they are accusing President Donald Trump of doing.

Sen. Chuck Schumer: "Simply to release the transcript is not going to come close to ending the need of the American public and the Congress to see what actually happened." pic.twitter.com/MYRLDoRTw7

How do you find a leak in a pipe? You run water through it and see what bucket fills. We all know CrowdStrike has backup servers and associations of various sub companies that are concentrated in Ukraine. While many claim Russia “hacked” the DNC server, parsing the imsubmisable report by CrowdStrike, the manufactured fingerprint code illustrating Russian origin was Chinese and derived from Ukraine, according to the head of CyberSec who claimed his investigation into the server was bottlenecked by Strzok’s team in August 2016.

This morning the MSM (mainstream media), both the PR arm for the Democrats, and conservative media, skipped over the most important part of the transcript! While they highlighted pleasantries and how President Trump reiterated appreciation for their cooperation into the CrowdStrike investigation, it turns out President Zelensky Shared the sentiment and agreed with who the POC for the Russia Hoax lead in the Ukraine was. To understand it fully, we will revisit old reports I have put out.

August 18, 2016, a few days after the CyberSec Senior official stated the operation was bottlenecked by Strzok, Barack Hussein Obama appointed a new Ambassador to the Ukraine. This new ambassador was actually Nellie Ohr’s “mentor” and worked the Russian Desk at the State Department under the administration of former impeached rapist President Bill Clinton. Her name, Marie Yovanovitch.

Though not by name, Yvanovitch was mentioned in the call between President Trump and President Zelensky.

All Presidential calls are immortalized in transcripts called Memorandum of a Telephone Conversation (TELCON), and these are done so by staff and interpreters in the situation room. Looks like they were VERBATIM, not accounting cultural nuance and grammar. The missing key component of this conversation indicates, President Zelensky asking President Trump to exchange notes on what information John Durham collected during his trip to Ukraine in May 2019, on both U.S. Ambassador to the Ukraine Yovanovich, and Ukrainian Ambassador to the U.S.

And what do you know?  We have a case where Yovanovitch was apparently Obama’s lapdog.

FMR Amb to Ukraine, the one mentioned in the call/transcript between @realDonaldTrump and Pres of Ukraine said, "not to listen or worry about Trump policy because he's going to be impeached."

Tore then posed the question, “What do AG Barr and Prosecutor Durham HAVE since May from Ukraine? Hillary’s emails.”

Notably it was previously reported :

Nellie Ohr’s research was contained on two thumb drives. “One alleged that unverified ties existed between the Trump organization and Russian mobsters; the other provided a timeline alleging wrongdoing by former Trump campaign manager Paul Manafort.

The thumb drives were backed up off the server that we now have from the Ukrainian government. We have Hillary’s emails, and all the back end work of Nellie Ohr while she was in Ukraine working on the “dossier” under the purview of her mentor Yovanovitch, as a contractor for Fusion GPS.

Tore then drops a bombshell:

As far as PRECEDENT goes, Since President Trump’s transcript with Ukraine was released that means transcripts sealed by Barack Hussein Obama under EO 13489 are no longer protected. We can now get transcripts of Barack Hussein Obama and Joe Biden speaking with any country including the Ukraine. They have nothing to hide, right? The Democrats believe they did nothing wrong, so they shouldn’t have a problem releasing them. Not like a fire would break out all of a sudden, right?

It is important that we draw the line in respects to reasoning behind the transcript’s release, when it is appropriate. This transcript release and those that we will be unsealing from Barack Hussein Obama’s archives records, must align with the scope at hand and be appropriate, according to our 1999 Treaty with Ukraine. If a well defined line of when discussions of the President of the United States and foreign leaders are eligible for public release isn’t etched in stone, trust between leaders of other nations and our president and future presidents will be eroded.

John Durham gets to Ukraine in May 2019, Yovanovitch is fired as ambassador. John Durham is appointed by Attorney General William Barr to investigate CRIMES and the origination of the #RussiaHoax. Under that investigation the “Atlantic Council” comes up and so does AntAC.

According to Article 2, Durham appointed by AG Barr, has the full authority to investigate, collect and share information.

ARTICLE 2 of the TREATY

Totally not a fix….. said no one EVER!

The investigation into the origination of #RussiaHoax WILL lead to IMPEACHMENT. Were federal tax dollars used to create a dossier?

No wonder USAID cannot reconcile their balances with that of the U.S. Treasury, with millions unaccounted for.

Now, Tore claims that the impeachment of Barack Hussein Obama Soetoro Sobarkah is imminent.  However, you only impeach sitting presidents.  If anything is to come to Obama, it must be formal charges of criminal activity, and once they start, there is a bottomless pit to the man’s crimes, including his ineligibility to be in the White House.