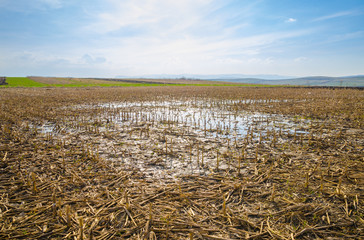 So far, 2019 has been a horrific year for farmers in the United States. Major flooding, an unnecessary trade war, and skyrocketing bankruptcies have left many farmers with a tough decision. One that will impact all of us.

According to Farm and Dairy, rain and flooding have limited any field work, and as of May 26, 2019, only 58% of the nation’s corn crop had been planted, and only 29% of U.S. soybeans were in the ground. In Ohio, only 22% of the corn had been planted, compared to a five-year average of 78% by this time, and only 11% of soybeans were planted, compared to a five-year average of 55%. Few farmers have been able to make hay or chop any forage crops. Fields that were planted in a rare weather window now need to be replanted, which is a huge financial burden for already cash strapped farmers.

Bankruptcies and suicides are rising at alarming rates among farmers. Part of the blame goes to the trade war, however, most farmers just don’t have any money and can’t continue. Bankruptcy is their only option. And when farmers grow less food, we all pay more under the basic economic law of supply and demand.

Farmers In America Are Killing Themselves In Record Numbers

Patty Edelburg, the vice president of the Washington-based NFU group, which says it represents some 200,000 U.S. farms, appeared on Fox News in May and detailed what she stated was the dire state of American farming. Amid falling income and commodity prices, farmers have been forced to make hard choices. Those choices are resulting in a surging number of bankruptcies, increased financial stress, and suicide in the agricultural community.

“It has been insane,” Edelburg told America’s Newsroom anchors Sandra Smith and Jon Scott. “We’ve had a lot of farmers—a lot more bankruptcies going on, a lot more farmer suicides. These things are highlighting many of the news stories in our local news.” But the flooding is also taking its toll. Farmers are being hit from all sides, and that is not a good thing considering they grow the food most of us eat.

“Farmers are in the midst of six consecutive years of falling commodity prices and depressed farm income,” Perdue told Newsweek in May. “In that time we’ve definitely heard increased concern from our membership, and other organizations have as well, related to folks in their community not doing well in terms of their mental health.”

We suggest that you begin preparations for a potential food shortage. It never hurts to have extra food on hand or to learn to grow your own. An excellent resource is The Prepper’s Blueprint by Tess Pennington. The book The Prepper’s Cookbook is also a great resource for those who may need to learn to cook foods on hand in the event of a food crisis. The book contains 300 Recipes that will help you turn your emergency food into nutritious, delicious, life-saving meals.