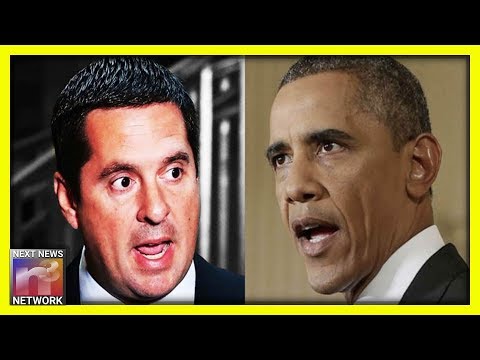 Devin Nunes is keeping hope alive that Barack Obama may someday be brought to justice.

Nunes correctly acknowledges that ALL of this Russia/Ukraine nonsense started with Obama.

Ukraine is just a continuation/plan-b of and for the failed “Russiagate” fiasco.

Here’s Gary with the video:

Let’s not forget that Ukrainegate was in Obama’s hands many years ago.

He likely gave birth to it by insisting on picking the regime that was put into power.

How many have forgotten the iron-fisted Obama helping to instill Neo-Nazis into power years ago?

So why isn’t Barack Obama constantly in the headlines now?

Unfortunately, as we all know, the media is rigged in favor of the left.

Here’s more from Nunes and Obama’s Russiagate ties from 100 Percent Fed Up:

California Congressman Devin Nunes, a Republican member of the House Intelligence Committee, joins Mark Levin to discuss the start of public hearings in the House impeachment inquiry. The interview is full of great information about the Russia Hoax and the impeachment hearings.

But first the most important part of the interview where Nunes calls out Obama:

“He really started all of this.”

“He created the fuse and lit the match after the election…”

Why in the hell isn’t Obama being criminally prosecuted for his heavy hand in creating this mess?

It’s the same reason that Bill and Hillary get lots of threats but never any real action against them.

I’ll let the immortal George Carlin explain it for you.

I sure wish you were still here to shine some light for all of us.

Devin Nunes has the courage to challenge “The Big Club” and we need more like him.

But, for now, The Deep State is still mostly in control.

Donald Trump promised to drain the swamp, but I’m not sure he understood how tough that task would be. He needs help.

If it does, swamp creatures are no longer protected and move to the endangered list.