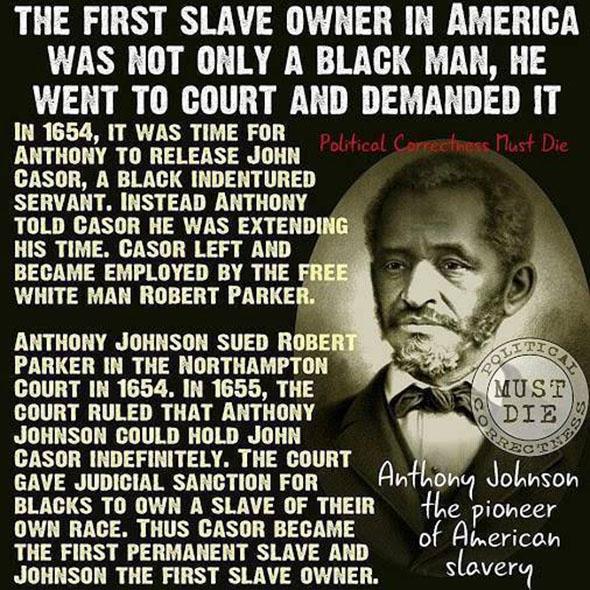 One of the most vexing questions in African-American history is whether free African Americans themselves owned slaves. The short answer to this question, as you might suspect, is yes, of course; some free black people in this country bought and sold other black people, and did so at least since 1654, continuing to do so right through the Civil War. For me, the really fascinating questions about black slave-owning are how many black “masters” were involved, how many slaves did they own and why did they own slaves?

The answers to these questions are complex, and historians have been arguing for some time over whether free blacks purchased family members as slaves in order to protect them—motivated, on the one hand, by benevolence and philanthropy, as historian Carter G. Woodson put it, or whether, on the other hand, they purchased other black people “as an act of exploitation,” primarily to exploit their free labor for profit, just as white slave owners did. The evidence shows that, unfortunately, both things are true. The great African-American historian, John Hope Franklin, states this clearly: “The majority of Negro owners of slaves had some personal interest in their property.” But, he admits, “There were instances, however, in which free Negroes had a real economic interest in the institution of slavery and held slaves in order to improve their economic status.”

In a fascinating essay reviewing this controversy, R. Halliburton shows that free black people have owned slaves “in each of the thirteen original states and later in every state that countenanced slavery,” at least since Anthony Johnson and his wife Mary went to court in Virginia in 1654 to obtain the services of their indentured servant, a black man, John Castor, for life.

And for a time, free black people could even “own” the services of white indentured servants in Virginia as well. Free blacks owned slaves in Boston by 1724 and in Connecticut by 1783; by 1790, 48 black people in Maryland owned 143 slaves. One particularly notorious black Maryland farmer named Nat Butler “regularly purchased and sold Negroes for the Southern trade,” Halliburton wrote.

{snip} Joel A. Rogers noted this phenomenon in his 100 Amazing Facts: “The Negro slave-holders, like the white ones, fought to keep their chattels in the Civil War.” Rogers also notes that some black men, including those in New Orleans at the outbreak of the War, “fought to perpetuate slavery.”

How Many Slaves Did Blacks Own?

So what do the actual numbers of black slave owners and their slaves tell us? In 1830, the year most carefully studied by Carter G. Woodson, about 13.7 percent (319,599) of the black population was free. Of these, 3,776 free Negroes owned 12,907 slaves, out of a total of 2,009,043 slaves owned in the entire United States, so the numbers of slaves owned by black people over all was quite small by comparison with the number owned by white people. In his essay, ” ‘The Known World’ of Free Black Slaveholders,” Thomas J. Pressly, using Woodson’s statistics, calculated that 54 (or about 1 percent) of these black slave owners in 1830 owned between 20 and 84 slaves; 172 (about 4 percent) owned between 10 to 19 slaves; and 3,550 (about 94 percent) each owned between 1 and 9 slaves. Crucially, 42 percent owned just one slave.

Moreover, Woodson explains, “Benevolent Negroes often purchased slaves to make their lot easier by granting them their freedom for a nominal sum, or by permitting them to work it out on liberal terms.” In other words, these black slave-owners, the clear majority, cleverly used the system of slavery to protect their loved ones. That’s the good news.

But not all did, and that is the bad news. Halliburton concludes, after examining the evidence, that “it would be a serious mistake to automatically assume that free blacks owned their spouse or children only for benevolent purposes.” Woodson himself notes that a “small number of slaves, however, does not always signify benevolence on the part of the owner.” {snip}

Who Were These Black Slave Owners?

If we were compiling a “Rogues Gallery of Black History,” the following free black slaveholders would be in it:

William Ellison’s fascinating story is told by Michael Johnson and James L. Roark in their book, Black Masters: A Free Family of Color in the Old South. At his death on the eve of the Civil War, Ellison was wealthier than nine out of 10 white people in South Carolina. He was born in 1790 as a slave on a plantation in the Fairfield District of the state, far up country from Charleston. In 1816, at the age of 26, he bought his own freedom, and soon bought his wife and their child. In 1822, he opened his own cotton gin, and soon became quite wealthy. By his death in 1860, he owned 900 acres of land and 63 slaves. Not one of his slaves was allowed to purchase his or her own freedom.

It would be a mistake to think that large black slaveholders were only men. In 1830, in Louisiana, the aforementioned Madame Antoine Dublucet owned 44 slaves, and Madame Ciprien Ricard owned 35 slaves, Louise Divivier owned 17 slaves, Genevieve Rigobert owned 16 slaves and Rose Lanoix and Caroline Miller both owned 13 slaves, while over in Georgia, Betsey Perry owned 25 slaves. According to Johnson and Roark, the wealthiest black person in Charleston, S.C., in 1860 was Maria Weston, who owned 14 slaves and property valued at more than $40,000, at a time when the average white man earned about $100 a year. (The city’s largest black slaveholders, though, were Justus Angel and Mistress L. Horry, both of whom owned 84 slaves.)

{snip} According to economic historian Stanley Engerman, “In Charleston, South Carolina about 42 percent of free blacks owned slaves in 1850, and about 64 percent of these slaveholders were women.” Greed, in other words, was gender-blind.

Why They Owned Slaves

These men and women, from William Stanly to Madame Ciprien Ricard, were among the largest free Negro slaveholders, and their motivations were neither benevolent nor philanthropic. One would be hard-pressed to account for their ownership of such large numbers of slaves except as avaricious, rapacious, acquisitive and predatory.

But lest we romanticize all of those small black slave owners who ostensibly purchased family members only for humanitarian reasons, even in these cases the evidence can be problematic. Halliburton, citing examples from an essay in the North American Review by Calvin Wilson in 1905, presents some hair-raising challenges to the idea that black people who owned their own family members always treated them well:

A free black in Trimble County, Kentucky, ” … sold his own son and daughter South, one for $1,000, the other for $1,200.” … A Maryland father sold his slave children in order to purchase his wife. A Columbus, Georgia, black woman—Dilsey Pope—owned her husband. “He offended her in some way and she sold him … ” Fanny Canady of Louisville, Kentucky, owned her husband Jim—a drunken cobbler—whom she threatened to “sell down the river.” At New Bern, North Carolina, a free black wife and son purchased their slave husband-father. When the newly bought father criticized his son, the son sold him to a slave trader. The son boasted afterward that “the old man had gone to the corn fields about New Orleans where they might learn him some manners.”

Carter Woodson, too, tells us that some of the husbands who purchased their spouses “were not anxious to liberate their wives immediately. They considered it advisable to put them on probation for a few years, and if they did not find them satisfactory they would sell their wives as other slave holders disposed of Negroes.” He then relates the example of a black man, a shoemaker in Charleston, S.C., who purchased his wife for $700. But “on finding her hard to please, he sold her a few months thereafter for $750, gaining $50 by the transaction.”

The good news, scholars agree, is that by 1860 the number of free blacks owning slaves had markedly decreased from 1830. {snip}