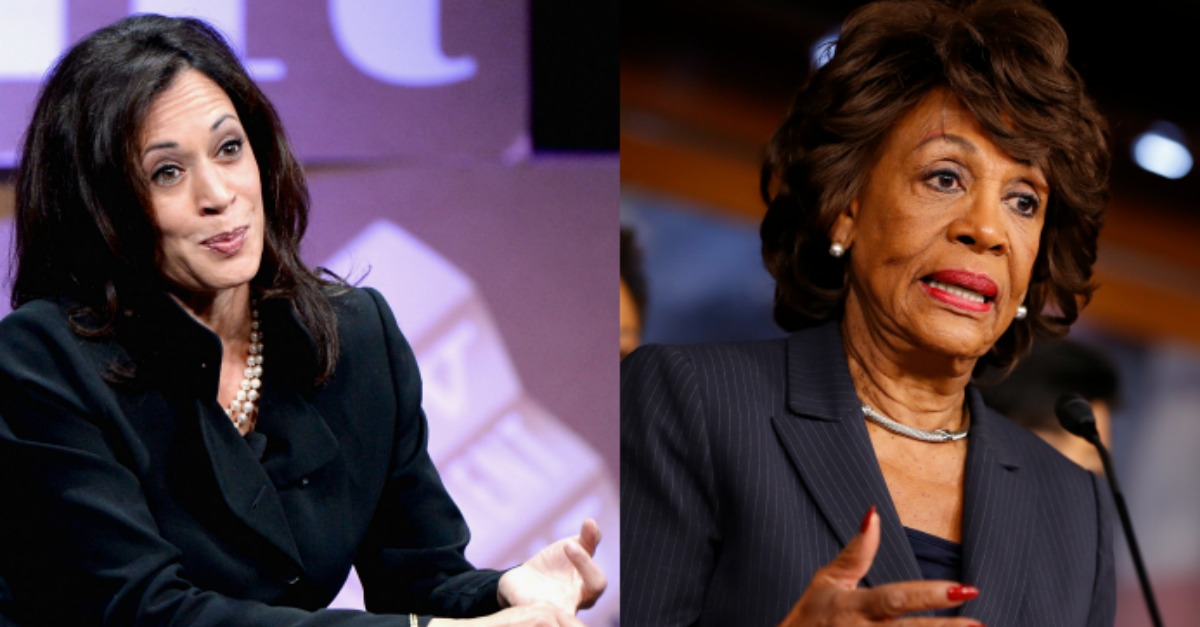 Recently she has made incendiary comments calling for public harassment of Trump Administration officials and even boldly proclaimed that God sent her to get Trump.

Many conservatives write her off as a raving lunatic.

Methodology and ethics aside, Maxine Waters is a shrewd politician that knows how to rally support and win elections.

The latest controversy surrounding her seems to highlight just how intelligent & calculating Congresswoman Waters really is.

The transaction was a payment to Waters’ campaign fund from the Democratic State Central Committee of California (DSCCC) in the amount of $35,000 for the inclusion of then-Senate candidate, and now Senator Kamala Harris, on Waters’ slate mailer. Whereas candidates like Harris may legally pay Waters’ campaign for the proportional costs of their inclusion on her slate mailer, it is not legal for such payment to be made by a third party like the DSCCC.

According to The Washington Free Beacon, this was not the first time that Senator Harris had paid for Waters’ endorsement.

During the 2016 election cycle, as Harris was running for U.S. Senate, Harris’s campaign committee, Kamala Harris for Senate, made a $30,000 payment in May 2016 to again appear on Waters’s endorsement mailer. Harris trounced former Democratic Rep. Loretta Sanchez in the race to replace Barbara Boxer in the Senate.

Please note that the 2016 payment from Harris was in addition to the $35,000 the NLPC claims was paid to Waters on behalf of Harris through the DSCCC.

Are we starting to see how much money is being transferred to Waters’ coffers?

This is only the tip of the iceberg. Senator Kamala Harris and the DSCCC are not the only parties interested in paying for a Waters’ endorsement.

Other candidates gladly pay tens of thousands of dollars for the right to appear on her slate mailers and receive her endorsement.

The California congresswoman has raised hundreds of thousands of dollars each election cycle from some of her state’s biggest politicians paying to be listed on her slate mailers—sample ballots traditionally mailed out to about 200,000 voters in Los Angeles highlighting whom she supports.

To add insult to injury, not only is Maxine Waters filling her coffers with the campaign contributions of other candidates, she has found a way to funnel $750,000 to her daughter as a result.

Waters runs a slate mailer, or endorsement mailer, operation through Citizens for Waters, her campaign committee, and has done so for years. The operation has proved lucrative to both the campaign’s coffers and to Karen Waters, Maxine’s daughter.

Karen has collected more than $750,000 in payments for running the operation, the Washington Free Beacon previously reported. The slate mailers also pull in lucrative cash for the Waters campaign. In order to appear on the mailer, a politician must make a donation to the committee.

This has been going on for years and nothing has been done about it. CalWatchDog.com was reporting on Waters’ controversial tactics back in 2010:

Rep. Waters has for many years operated a slate mail business that personally benefits her daughter. In each election cycle, Waters releases a voter guide featuring her picture and a list of candidates she endorses and ballot measures she supports. Candidates and ballot measure committees pay to be listed on the guide. Until the 2004 election, Karen Waters ran the operation through a state committee called L.A. Vote.

Starting with the 2004 cycle, Maxine Waters’ federal campaign committees have taken responsibility for collecting the checks from candidates appearing on the guide. They also pay the bills for producing and mailing the guide. Every cycle, one of the largest bills is Karen Waters’ management fee. Sometimes it’s the largest bill. The Waters committee confirmed in an FEC report just weeks ago that the operation has continued right up through the 2010 primary season. Indeed, the June 2010 primary saw huge payments by a few candidates to appear on the voter guide.

How much is Maxine Waters’ endorsement worth?

If you look at the results of the last two general elections in her district (California’s 43rd District), her endorsement is worth a lot. She dominated her opponents in both 2016 and 2014:

Some claim that Maxine Waters is simply exploiting a legal loophole. According to Tom Anderson of the NLPC, “Maxine Waters found an old provision and turned it into a cottage industry.”

Slate mailers are controversial in nature but somewhat common in states like California and Oregon.

However, Maxine Waters is believed to be the only candidate running a slate mailing operation at the federal level.

This pay-for-play operation run by Maxine Waters might be legal, but it is definitely not ethical by any stretch of the imagination.

This is American politics folks.

Is it any wonder that so many Americans have checked out of the political scene?

America has lost faith in her so-called “leaders”.

It would take a miracle for Maxine Waters to lose her seat this fall.

But I would hope that Los Angeles Democrats pause for thought and ask themselves a simple question:

How would I feel if a Republican candidate were doing this?