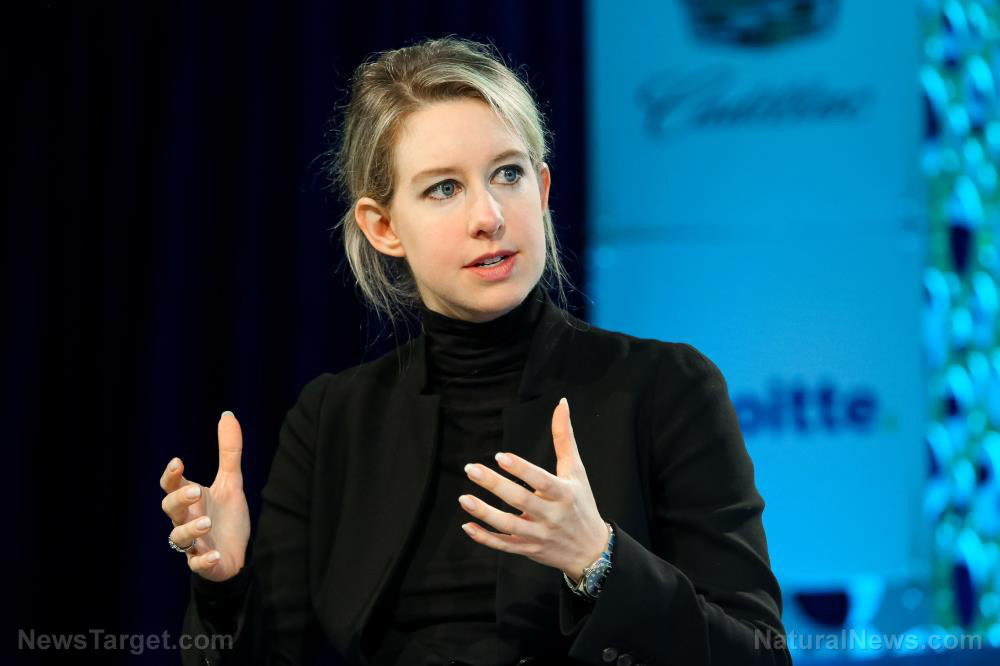 (Natural News) On November 18 in San Jose, Calif., Elizabeth Holmes, the ringleader of the infamous Theranos investment scam, will be sentenced to prison for potentially 80 years after being convicted of three counts of wire fraud and one felony count of conspiracy to commit fraud.

The gist of it is that Holmes hyped up a new blood draw and testing technology that it turns out never actually existed, but that investors were told was right around the corner. She ended up becoming a billionaire because of this fraud, only to later be caught, charged, convicted, and soon to be sentenced for her crimes.

For a while, Holmes was propped up by the corporate-controlled media as the next “Steve Jobs.” It turns out that nobody actually looked into what Holmes was purportedly doing and instead focused on the fact that she is female, which for some reason gave her unquestionable credibility.

The gravy train of criminality and fraud eventually came to an end after investors realized they had been bilked out of hundreds of millions of dollars. They now want Holmes locked away for as long as possible, though her lawyers are attempting to reduce her sentence to just 18 months because she has no criminal history prior to this investment scam and is supposedly no longer a danger to society.

How many other Elizabeth Holmes types are out there ripping people off of their investments?

Prosecutors in the case say it is “one of the most substantial white collar offenses Silicon Valley or any other District has seen.” The only reason this is true, though, is because all the rest of the criminals that infest Silicon Valley have yet to be caught let alone tried and punished.

“She repeatedly chose lies, hype and the prospect of billions of dollars over patient safety and fair dealing with investors,” announced Assistant U.S. Attorney Robert S. Leach in a 46-page brief. “Elizabeth Holmes’ crimes were not failing, they were lying – lying in the most serious context, where everyone needed her to tell the truth.”

As a rebuttal, Holmes’ lawyers argue that their client has already paid the price for her crimes with a reputation that is now “permanently destroyed” as she has turned herself into a “caricature to be mocked and vilified.” Holmes’ life as anything resembling a trustworthy human, in other words, is long over.

In addition to a lengthy prison sentence, prosecutors also want Holmes to fork over more than $803 million in restitution for her crimes, which negatively impacted many wealthy investors who are not used to losing money like this.

“She preyed on hopes of her investors that a young, dynamic entrepreneur had changed healthcare. She leveraged the credibility of her illustrious board,” Leach further wrote. “And, through her deceit, she attained spectacular fame, adoration, and billions of dollars of wealth.”

“At trial, she blamed her COO (and longtime boyfriend), her board, her scientists, her business partners, her investors, her marketing firm, her attorneys, the media – everyone, that is, but herself.”

Former Theranos chief operation officer, 57-year-old Ramesh “Sunny” Balwani, was also convicted on 12 felony counts of investor and patient fraud back in July during a separate trial. He is scheduled to receive his prison sentence on December 7.

Leach’s argument is that Holmes, as well as others at the company like Balwani, we now know, put people’s lives in jeopardy with their little investment scam, seeing as how the fake product in question was an “unproven and unreliable medical device” that was neither safe nor effective.

More related news coverage about criminal corporations and investing fraud can be found at Corruption.news.