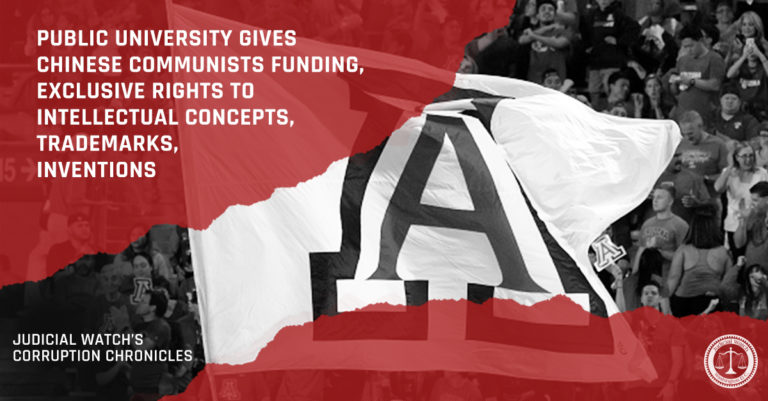 Correction: This morning we posted this story with incorrect references to the University of Alabama. We failed. Sometimes we rush to get stories out and fail in fully fact checking/proofreading them. It was an honest mistake by one of our most trusted authors. We do apologize. Thanks. -Dean Garrison, Publisher

I have friends who have had business dealings in China. Apparently, many Chinese businessmen are nothing but crooks. They steal the person’s product, apply for their own patent and then turn around and sell a knock off of the original. Now, it’s come out the taxpayer-funded University of Arizona has launched a Confucius Institute on its Tucson campus, according to records, which are funded by the Chinese government and managed by China’s Ministry of Education to spread Communist ideas. However, it’s what they are doing with them that is disturbing and downright treasonous.

Judicial Watch documents what has been taking place through the Confucius Institute and the University of Arizona in a recent report.

Despite knowing what the Confucius Institutes do, who funds them and the anti-American ideology behind them, Judicial Watch points out that “dozens of universities throughout the U.S. have erected Confucius Institutes in the last few years, though many have closed over national security concerns and pressure from the Trump administration.”

This year the U.S. government finally upped the ante, threatening to withhold generous Department of Defense (DOD) language program funding to schools with Confucius Institutes. UA is among the campuses that reportedly will shut down its Confucius Institute at the end of the year to keep its DOD money, but the school’s longtime support for the Communist program cannot be erased from the ledgers. The campus allocated $100,000 in “initial start-up funds” to launch a Confucius Institute in 2007, according to a document obtained by Judicial Watch through an Arizona Public Records request. In the following years, UA dedicated at least $1.9 million to the Communist installation through various campus clubs and organizations, the records show. The figure is likely much higher because school officials claim they did not keep records of Confucius Institute funding or activities prior to 2012. Therefore, UA provided Judicial Watch with “the most complete records available beginning January 2012 to September 2019.”

Written in Chinese and English, the original agreement is between the Arizona Board of Regents and the People’s Republic of China. It is signed by former UA President Robert N. Shelton on behalf of the board and Lin Xu, identified in the document as chief executive of the Confucius Institute Headquarters (Hanban), People’s Republic of China. The contract allots UA employees paid positions within the Confucius Institute and provides the Chinese establishment with offices, classrooms, equipment, operating supplies and funding, instructors, guest lecturers, administrative services and other assorted resources. It also provides the Confucius Institute with exclusive rights to intellectual concepts, trademarks and inventions. A continuation agreement signed in 2013 is marked “confidential” and renews automatically unless the parties want out. Under threat of losing DOD funding, UA reluctantly decided to close its Confucius Institute at the end of the year, according to university sources contacted by Judicial Watch. Nevertheless, from 2012 to 2019 the records show that there were more than 400 university approved events and classes with the Confucius Institute.

The watchdog group went on to add:

The longtime partnership between a public U.S. institution of higher learning and Chinese Communists is outrageous, especially considering the myriad of threats—military, economic and human rights—posed by China. Lately human rights have been at the forefront of global media coverage with violent pro-democracy protests in Hong Kong. Chinese President Xi Jinping recently said that any attempts to cause division in China “will end in crushed bodies and shattered bones.” Though the human rights crisis is receiving a lot of attention, China’s economic threat to the U.S. is not to be minimized. The FBI routinely investigates the theft of intellectual property and trade secrets by the People’s Republic of China from the United States. The crimes include but are not limited to medical devices, computer intrusions, false statements and transportation software. More recently, the Trump administration killed a decades-long contract between the Obama administration and China that allowed the Communists to control the second-busiest container port in the U.S.

With what is currently going on in Hong Kong and what has been taking place with the corrupt Communist government there, why in the world are we not disposing of every one of these Institutes?

UoA has a lot of explaining to do.