(Natural News) This story is getting very little coverage in the legacy media for obvious reasons. Just like California, Oregon has gone full authoritarian in trying to force its fake science “climate change” agenda on everyone. Over the last few days, Oregon’s Gov. Kate Brown has ordered the gunpoint rounding up of Republican lawmakers in order to force a vote on a climate change “cap and trade” scheme (HB 2020) that only enriches corrupt Democrat insiders.

As BigLeaguePolitics.com reports, the Oregon Three Percenters appear to be getting involved to protect the citizens of Oregon from the authoritarian tyranny of the corrupt Democrats:

The Oregon Three Percenters, who participated in the armed takeover of a wildlife refuge in 2016, was one of many groups to support the Republican legislators’ defiance. Apparently this, along with support for the legislators by other right-wing groups, was unsettling to law enforcement. The State Capitol was closed Saturday “due to a possible militia threat,” according to a spokesman for Senate President Peter Courtney.

The real threat in Oregon, of course, is the tyrannical governor and her authoritarian Democrat jack-booted thugs (i.e. the Oregon State Police) who are now hunting down Republican lawmakers at gunpoint in order to shove their destructive law through the legislature. As The National Sentinel reports, “Raising the cost of production and doing business (cause) will have predictable effects: Loss of jobs, loss of revenue, higher prices, higher energy costs. And for some in Oregon — farmers, truck drivers, loggers — the law would decimate their industries. And worse, there is no real consensus that human activity is causing the climate to change. In fact, the Left’s predictions of doom and gloom are routinely debunked by reality. In particular, Republicans say that gas prices alone would rise 22 cents a gallon almost immediately, and much more over the long haul.”

Does the Oregon citizens’ militia have a duty to arrest Gov. Kate Brown?

It all begs the question: If the radical left-wing governor of Oregon is willing to dispatch armed hunting squads to round up Republican lawmakers at gunpoint, don’t the citizens of Oregon have the right (and possibly the duty) to arrest Gov. Kate Brown and charge her with abuse of power and making threats of violence against lawmakers? Dispatching armed police to round up your political opponents is surely a crime. Is it a crime that will be tolerated by the citizens of Oregon?

This question will likely be debated in the days ahead as things continue to heat up across the political landscape. Just today, Breitbart.com is now reporting that left-wing radicals at UT Austin are threatening to dox students who join conservative groups like Young Conservatives of Texas (YCT). As Breitbart reports, the organized threats are coming from a blog reportedly run by radical left-wing Antifa-class terrorists. The blog is called “Austin Autonomedia.”

The blog goes on to actively encourage the harassment of conservative students, stating that it is “extremely important to get organized early, while this [TPUSA] group is in its infancy.”

This is just one of many such hot spots across the country where deranged, lawless Leftists are increasingly resorting to terror-style tactics to enforce their demands for absolute obedience to their left-wing agenda that’s rooted in hatred and bigotry.

Unbounded by anything resembling morals, ethics or the rule of law, the radical Left in America today increasingly resembles a runaway terror train driven by deranged clowns who nave never been told “No!” in their entire lives. Since childhood, they’ve whined, manipulated and crybullied their way into everything, collecting “participation trophies” and perfecting the skills of victimhood while simultaneously bullying everyone around them. All the while, they’ve been indoctrinated with a dangerous cocktail of authoritarianism and Marxism, and with the censorship of all conservatives by the evil tech giants, radical Leftists now feel emboldened to enforce their Nazi-style obedience demands by threatening everyone who opposes them. This is exactly what’s playing out at UT Austin and across nearly every liberal college campus in America.

I predict it’s not far off now before the lunatic left-wing terrorists (Antifa and other groups) are met by hardened, determined patriots who are fed up with their country being overrun by pathetic libtard snowflake Marxists. After a single engagement, the left-wing terror pushers will very rapidly come to understand the meaning of the word, “No!”

For many, it will be the first — and possibly the last — time they will have ever been disciplined by anyone. And it’s a lesson that left-wing radicals desperately need to be taught. Apparently, their parents never had the backbone to set limits on anything, so they’re going to have to be taught another way.

As it stands right now, America is just one trigger event away from all-out open warfare in the streets of places like Portland, Austin or Seattle. The tyranny, lawlessness and pure evil of the lunatic Left is so out of control that even once-skeptical Americans are now fully convinced that the radical Left must be stopped if we are to have anything resembling America still remaining in a few years.

The upcoming 2020 elections will likely be the final spark that ignites the real war. If Democrats win the election, it can only have been accomplished by vote rigging, coordinated censorship racketeering and massive voter fraud by illegals. Conservative Americans will simply not accept the fraud. On the other hand, if Trump wins re-election, Leftists will escalate their insanity to a whole new level of mind-boggling mass mental illness that makes The Joker from Batman look like a Boy Scout. Imagine an uprising of rainbow-painted transgender terrorist pedophiles wielding spiked baseball bats and pink dildos, demanding the mass executions of conservatives and Christians in the name of “tolerance.” That’s no longer a bizarre fictional scenario, especially when we’re already living in a society where Leftists self-identify as “transgender queer clown nuns.”

Seriously, the left-wing media is now pushing “transgender queer clown nuns” as the new progressive American family. Here’s a partial picture of what they look like: 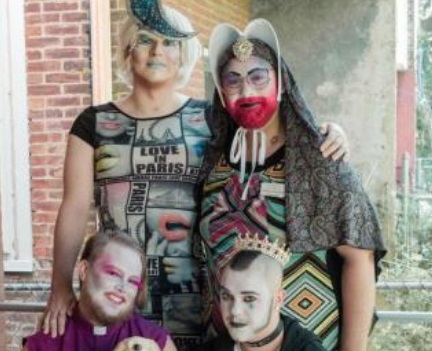 As you ponder the depths of mass mental illness being pushed by trans-predators across America, ask yourself how this twisted, bizarre chapter of human history finally ends… and how many innocent children end up mutilated and sexually assaulted in the name of “progressivism” before the trans-predators are finally stopped.

The good news about the trans-queer clown nuns is that they will never join with Antifa, since Antifa members refuse to show their faces. The clown nuns want to show their faces. After all, what good is all that clown makeup if they slap an Antifa scarf over it? (If you ever capture an Antifa terrorist, rip off their scarf and see if they’re actually a secret trans-queer clown nun underneath!)

Seriously, s##t is crazier than you could have ever imagined. Watch this video and weep:

June 21, 2021
Right Report
WHOA! Look Who’s PUSHING Joe Manchin To Switch To The Republican Party- It’s Totally NOT Who You Think It Is!
AFF