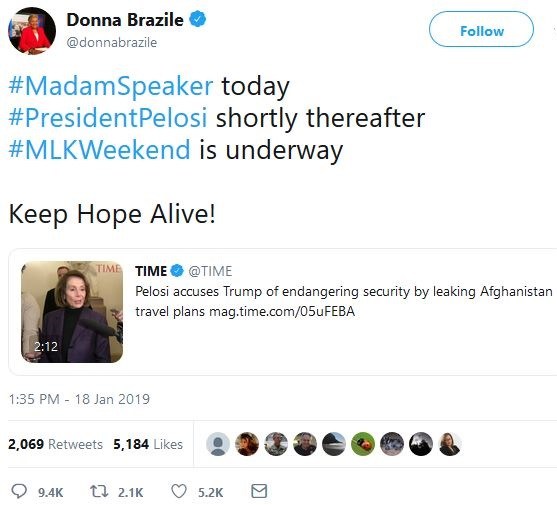 Donna Brazile, 59, is a Democrat apparatchik, Al Gore’s presidential campaign manager in 2000, and the interim chair of the Democratic National Committee in Spring 2011 and, again, during the 2016 presidential campaign when she deliberately sabotaged Hillary Clinton’s rival, Bernie Sanders. See:

According to the 1947 Presidential Succession Act, if a sitting U.S. president is incapacitated, the line of presidential succession is:

This means House Speaker Nancy Pelosi could only succeed as president if President Trump and Vice President Pence were both incapacitated, as in assassinated.

Rumors began to fly across the Alternative Media when netizens put together Brazile’s curious January 18 tweet and President Trump’s banning of Pelosi’s planned overseas trip a day before, on January 17.

As an example, here’s a series of tweets posted by netizen Greg Rubini:

why Nancy Pelosi was so eager to fly away from the country? with other 92 persons (Dem reps, +families) +a lot of luggage?

why on a Military plane? why Pelosi wanted to personally select the crew of the Military airplane?

Nancy wanted to be sure to have “Pelosi allied” Military guys as crew, perhaps?

why Pelosi wanted to fly away at all costs?

why Pelosi wanted to fly away with Adam Schiff, plus other 6 Dem congressmen, plus 85 family members?

during a Gov’t shutdown? isn’t it weird?

is this a DeepState plot to assassinate Trump and Pence and replace them with Nancy Pelosi as President of the USA ?

we know from a trusted source – Dr. Dave Janda – that there have been “a dozen of assassination attempts on President Trump” cc: Dr. Janda @docdhj