Two sisters were found bound together, dead, floating in the East River in New York City. For the past few days, the police were asking the public for information, trying to find out who they were. I followed the story carefully because young girls dying in this way raises flags. Knowing what I know now, there is no doubt in my mind this was a double honor killing:

December 2017: Sisters run away and beg police not to tell mom where they were. They return back to Virginia at some stage afterwards

August 2018: Tala is reported missing. The search is called off when police learn she is with her sister in New York City.

October 17: Mother’s last known contact with the sisters, according to relatives

October 23: Mother receives call from Saudi Consulate ordering the family home because the girls have applied for political asylum

October 24: The girls bodies are found washed up in the Hudson River

These two sisters wanted to be free. They worked hard to stay alive – they lived in various shelters and had applied for asylum – fearing persecution for religious or political beliefs.

‘They were a happy family,’ says relative of Saudi sisters found dead in New York – then why did they keep running away?

The mother of the women told detectives that the day before their bodies were discovered, she received a phone call from the Saudi Arabian Embassy, the New York Post reported, citing police sources.
The Embassy reportedly told her that her family’s residency in the U.S. was in jeopardy because Rotana and Tala applied for immigration asylum.
The following day, their bodies were found in the Hudson River on the Upper West Side. The two were fully clothed, with no obvious signs of trauma, bound together by duct tape and facing each other, according to police.

Believe nothing the family says.

FIRST PICTURES: SISTERS FOUND DROWNED AND DUCT-TAPED TOGETHER HAD BEEN ORDERED HOME BY THE SAUDI GOVERNMENT A DAY BEFORE THEIR BODIES WASHED UP AND A YEAR AFTER THEY FLED TO A SHELTER AND BEGGED POLICE NOT TO TELL THEIR FAMILY WHERE THEY WERE

By Jennifer Smith and Alana Goodman In Fairfax, Virginia For Dailymail.com, October 31, 2018:

Police have released the first photographs of Saudi Arabian sisters who were found drowned and duct taped together in the Hudson River last week in a plea for information about their mysterious lives and murky deaths.

Tala Farea, 16, and Rotana Farea, 22, were found washed up on October 24. The sisters were living together in New York City where Rotana was studying Computer and Information Technology after recently dropping out of George Mason University in Virginia.

Their parents, Wafa’a and Abdulsalam, live in Virginia with their brothers who are 18 and 11. Abdulsalam often traveled back to Saudi Arabia for work but no information about his job has emerged.

In August, the family reported 16-year-old Tala missing after she disappeared from Virginia but the search was called off when they learned she had gone to stay with her sister in New York City. 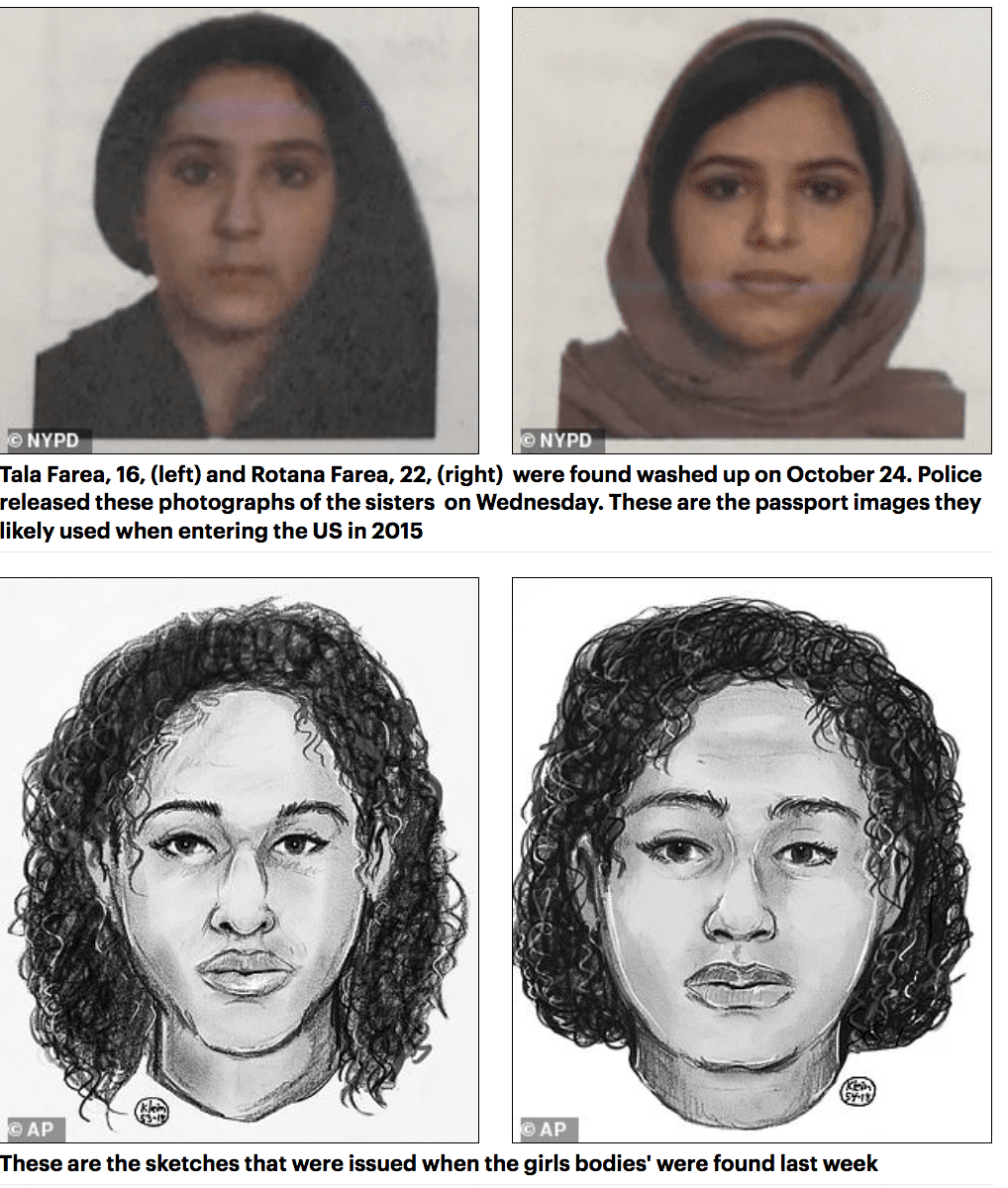 She had recently been awarded a spot at a top private school in Saudi Arabia with a full scholarship but was desperate not to go.

It was the second time they broke off from the family.

In December last year, the pair fled to a shelter in Fairfax. The family reported them both missing.

When officers tracked them down, the sisters begged them not to tell the family where they were. What led to them returning home remains a mystery but police are focusing their investigation on the circumstances surrounding it.

Despite their repeated attempts to live independently from their parents, the family was described as ‘happy’ by Arab media outlets and were the ‘apples of their father’s eye’.

‘Their mother was naturally protective, but in no way was their household problematic for them to run away,’ they told Arab News.

They said the family was happy with Tala living with her sister who she missed dearl when she left Virginia.

‘Tala was upset for quite some time after her sister decided to continue her studies in NYC. Yes, it did cause a problem for the family as the mother had to file a missing case report to the police over her daughter’s disappearance, but the search was called off later when they found Tala was with her sister, Rotana.

‘The police told their mother that since her younger daughter was safe with an adult, it’s safe to call off the search.’

The girls only ever used Snapchat, they said, and communicated with their relatives in Saudi Arabia through it.

‘They were private and kept to themselves most of the time, but we communicated mostly via Snapchat and it wasn’t a surprise to any of us that they wouldn’t have any accounts on other social media apps,’ the unnamed family member said.

‘They were calm and always polite. All families have problems. What kind of sibling relationship would it be without fights every now and then?

December 2017: Sisters run away and beg police not to tell mom where they were. They return back to Virginia at some stage afterwards

August 2018: Tala is reported missing. The search is called off when police learn she is with her sister in New York City.

October 17: Mother’s last known contact with the sisters, according to relatives

October 23: Mother receives call from Saudi Consulate ordering the family home because the girls have applied for political asylum

October 24: The girls bodies are found washed up in the Hudson River

‘But that didn’t push them to the edge as the Western media is portraying,’ they added.

The NYPD has not ruled anything out.

Chief of Detectives Dermot Shea said yesterday: ‘We are looking at all clues in their past life.’

The family in Virginia is yet to speak out about their disappearance despite DailyMail.com’s repeated attempts to contact their representative.

On October 23, the girls’ mother Wafa’a received a phone call from an official at the Saudi Arabian consulate who ordered the entire family to return to their home country. It was in response to an application by the two sisters for political asylum in the United States.

Police have ruled out that the pair jumped from the George Washington Bridge in a suicide pact, a theory that was initially pushed out by police, because neither body had visible signs of trauma.

It is not known how long they were dead before they were found but police struggled to identify them for days.

Rotana dropped out of George Mason in May this year after two years of studies. George Mason, a public university with 35,000 students has close ties to Saudi Arabia.
We are looking at all clues in their past life,
NYPD Chief of Detectives Dermot Shea

The Saudi Arabia Cultural Mission has gifted the college $63 million and has paid for the education of 270 of its 370 Saudi students.

Rather than live on campus like many of her classmates, Rotana traveled back to her home in Falls Church, Virginia where she lived with her mother, brother and Tala.

Rotana attended classes at the Volgenau School of Engineering and sources say she planned to major in bio-engineering when she returned this fall.

But the University told DailyMail.com that Rotana never returned in August to complete her education.

Problems arose for Rotana when she learned her whole family would have to return to Jeddah, Saudi Arabia.

A source at the Saudi Arabian Embassy in Washington, DC told DailyMail.com Rotana’s sister Tala had won a full scholarship to study at Dar Al-Fikr,  a top private school in Jeddah.

Tala had briefly studied in 2017 at Fairfax High School, close to George Mason University. Rotana and Tala’s mother contacted The National Center for Missing and Exploited Children on August 24 after Tala went missing from home.

She then called off the search after learning Tala was with Rotana in New York.

She also told authorities the pair were applying for asylum in the US to avoid returning to Jeddah.

Family members told Arab News that the two sisters had only lost contact with their mother a week ago.

They are insisting that the pair did not commit suicide and are waiting to find out the cause of death from the Chief Medical Examiner, which has not yet released findings from the autopsies.

Democrats Quietly Vote to Allow Illegal Aliens to Work as Congressional Staffers
August 1st, 2021 The Lid
Powered by WordPress RSS Feed Plugin
PowerInbox 5×1
You Might Like