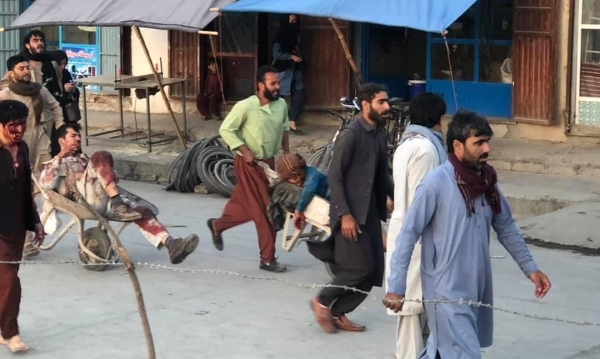 (Natural News) More than a dozen U.S. military personnel were killed and dozens more wounded in well-coordinated attacks on their positions at the Hamid Karzai International Airport in Kabul, Afghanistan, on Thursday, leading scores of Republican lawmakers to call on Joe Biden and Kamala Harris to either resign or be impeached and removed from office.

The attacks began with a pair of suicide bombings on a gate manned by American Marines and U.S. Army personnel as evening approached in the southwest Asian country, but explosions continued to rock the airport in the hours that followed, according to multiple reports.

“Melania and I send our deepest condolences to the families of our brilliant Service Members whose duty to the U.S.A. meant so much to them,” former President Donald Trump said in a statement. “Our thoughts are also with the families of the innocent civilians who died today in the savage Kabul attack.”

“This tragedy should have never been allowed to happen, which makes our grief even deeper and more difficult to understand,” Trump continued. “May God bless the U.S.A.”

The head of U.S. forces in the Middle East and Afghanistan says 12 U.S. service members were killed in the suicide attack outside the Kabul airport. 15 others were wounded.

The attacks were launched at the masses of people gathered at the airport trying to get flights out as Taliban officials and fighters tighten their grip on the country and an Aug. 31 withdrawal deadline for the U.S. and NATO quickly approaches.

By late afternoon Thursday, according to CNN, officials said that at least 60 people were killed and 140 wounded. About 1,000 Americans, most of whom say they want to leave, remain in the country, U.S. officials said.

“As of today we have 5,000 evacuees on the ramp awaiting air lift. Since August 14, we’ve evacuated more than 104,000 civilians, over 66,000 by the United States and over 37,000 by our allies and partners. … As the secretary of state said yesterday, we believe there are about a little more than 1,000 Americans left in Afghanistan at this point,” McKenzie told reporters at a Pentagon briefing.

And though the “threat from ISIS is extremely real,” the evacuation will continue, said McKenzie.

He added that despite the attacks, U.S. troops remain engaged in bringing evacuees into the airport.

“We are continuing to bring people onto the airfield. We just brought a number of buses aboard the airfield over the last couple or three hours. We’ll continue to process and flow people out. The plan is designed to operate under stress and under attack. And we will coordinate to make sure it’s safe for American citizens to come to the airfield. If it’s not, we’ll tell them to hold and work other ways to get them to the airport. We’ll continue to flow them out until the end of the month,” he said.

“I will tell you this: Any time you build a noncombatant evacuation plan like this and you bring in forces, you expect to be attacked. We thought this would happen sooner or later,” McKenzie said earlier.

“It’s tragic that happened today. It’s tragic there is this much loss of life. We are prepared to continue the mission. … I think we can continue to conduct our mission even while we’re receiving attacks like this,” he added.

Several Republicans called on both Biden and Harris to step down.

“Should Biden step down or be removed for his handling of Afghanistan? Yes,” former UN Ambassador Nikki Haley tweeted. “But that would leave us with Kamala Harris which would be ten times worse. God help us.”

“If President Trump can be impeached over a phone call, then the time has come to IMPEACH Biden for gross negligence in Afghanistan. Americans deserve better. We deserve better than someone who willfully IGNORES the WORST crisis in decades,” Rep. Ronnie Jackson of Texas, the former White House physician, wrote.