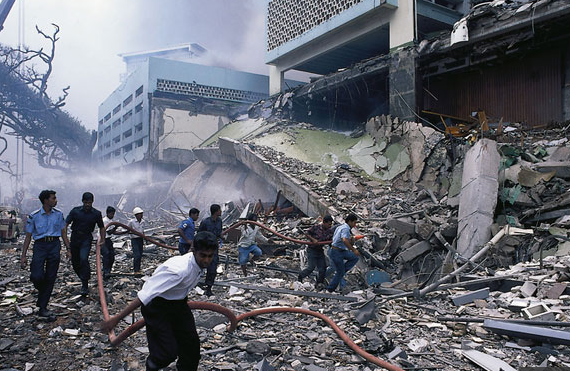 According to a story in the Daily Mail, “Sri Lanka’s police chief warned of potential suicide bombing plots on ‘prominent churches’ from Islamic extremists ten days before today’s attacks which killed 207 people.”

‘A foreign intelligence agency has reported that the NTJ (National Thowheeth Jama’ath) is planning to carry out suicide attacks targeting prominent churches as well as the Indian high commission in Colombo,’ the alert said.

The NTJ is a radical Muslim group in Sri Lanka that was linked last year to the vandalization of Buddhist statues.

A police spokesman said 13 suspects have been arrested in connection with the attacks. Police said they also found a vehicle they believe was used to transport the suspects into Colombo, along with a safe house used by the attackers.

Defense Minister Ruwan Wijewardena described the attacks as a terrorist attack by religious extremists, though no one immediately claimed responsibility. Prime Minister Ranil Wickremesinghe said he feared the violence could trigger instability in the country and its economy.

The explosions collapsed ceilings and blew out windows, killing worshippers and hotel guests. People were seen carrying the wounded out of blood-spattered pews. Witnesses described powerful explosions, followed by scenes of smoke, blood, broken glass, alarms going off and victims screaming in terror.

“People were being dragged out,” Bhanuka Harischandra of Colombo, a 24-year-old founder of a tech marketing company who was going to the city’s Shangri-La Hotel for a meeting when it was bombed. “People didn’t know what was going on. It was panic mode.”

He added: “There was blood everywhere.”

The first explosion occurred around 8:45 a.m. local time, with the deadliest at St. Sebastian’s Church in Negombo, a city about 20 miles north of Colombo. Other attacks occurred at St. Anthony’s Shrine in Colombo and Zion Church in the eastern city of Batticaloa. The three hotels – the Shangri La, Cinnamon Grand and Kingsbury Hotel – all in Colombo are frequented by foreign tourists.

The other two blasts occurred in Dematagoda, where the occupants of a safehouse apparently detonated explosives to prevent arrest.

An official told the Associated Press that at least two of the church blasts were believed to have been coordinated attack carried out by suicide bombers.

The U.S. State Department confirmed in a statement that “several U.S. citizens were among those killed” in the explosions, though details were still emerging. Secretary of State Mike Pompeo went on to condemn the Easter morning “terror attacks.”

“Attacks on innocent people gathering in a place of worship or enjoying a holiday meal are affronts to the universal values and freedoms that we hold dear, and demonstrate yet again the brutal nature of radical terrorists whose sole aim is to threaten peace and security,” Pompeo said in the statement.