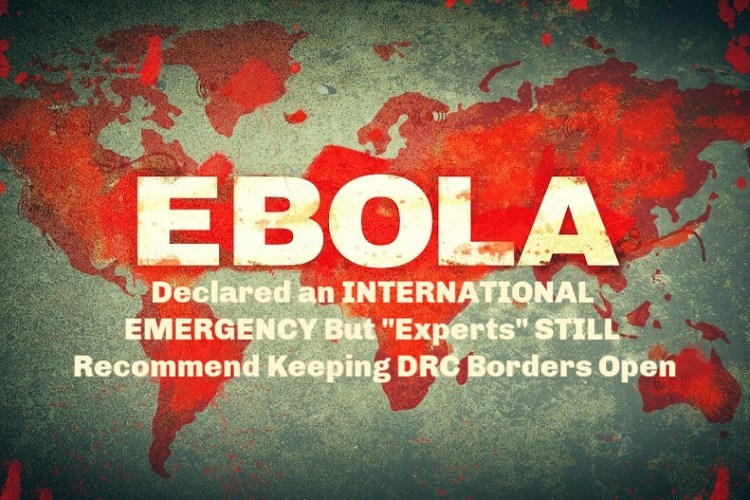 If you haven’t heard by now, the World Health Organization has declared the Ebola outbreak in the Democratic Republic of Congo an international emergency. Despite this, experts STILL recommend keeping the borders open to the DRC.

After 3 previous meetings in which WHO was reluctant to provide this designation to the crisis, the tipping point was a case of Ebola in Goma, a city of over one million people that is right on the border of Rwanda. Goma is a major transport hub, and as such, should Ebola take a foothold there, it’s entirely likely we could see it spread to the furthest corners of the earth.

Here’s how some of the far-flung cases have spread.

The patient in the case in Goma was a pastor, and he has passed away from the disease. Having died (and been contagious) in such a densely populated urban area, there are fears that others may have contracted the disease from him.

The people who traveled on the bus with the ailing pastor were all identified and given an experimental vaccine (which thus far has been very effective.) Then, according to the Health Ministry, workers followed up with the pastor’s contacts off the bus, as well as the contacts of his fellow passengers.

“Because of the speed with which the patient was identified and isolated, and the identification of all the other bus passengers coming from Butembo, the risk of it spreading in the rest of the city of Goma is small,” the ministry said in a statement. (source)

In another case, the disease appeared in Uganda. A Congolese woman traveled to Uganda to purchase fish on July 11. She went back to DRC, where she perished of Ebola on July 15.

Despite this, the WHO is still not clamping down on border security.

Dr. Tedros Adhanom Ghebreyesus, director-general of the WHO, still wants surrounding countries to keep their borders open to DRC.

Dr. Tedros said that it was important that neighbouring countries did not close their borders as this would have a negative impact on travel and trade.

“Now is the time for the international community to stand in solidarity with the people of DRC, not to impose punitive and counter-productive restrictions,” he said.

He added: “Such restrictions force people to use informal and unmonitored crossings, increasing the potential for spread of the disease.” (source)

“There is a huge amount of travel between Rwanda, Uganda and DRC. An international emergency could have a huge impact on people crossing the border and on trade and people’s livelihoods,” he said. (source)

So why did they even call an international emergency?

Experts hope that declaring an international health emergency will bring more attention to the outbreak which, up to now, has largely been ignored by the global community.

The UK and United States governments have been generous – the UK has given £37.7m and has pledged a further £50m – but international development secretary Rory Stewart earlier this week urged “dear friends” in the G7 group of richest nations to step up and do more.

The WHO has less than half the $98.4m it required for the period February to July, receiving just $43.6m. Dr. Tedros said that the organisation was finalising its budget for tackling the outbreak beyond this month which would probably run into hundreds of millions of dollars. (source)

They’re going to need more than money to contain this outbreak. It’s occurring in the midst of a violent war and healthcare workers are dealing with people who are afraid of them. Locals don’t trust the influx of foreign doctors and nurses and are suspicious of their treatments.

Here’s why we don’t need to worry…YET.

When I say we don’t need to worry yet, please keep in mind that this could change in the course of one day. I’m sure you remember the frenzy back in 2014 when Thomas Duncan of Liberia was diagnosed with Ebola in Texas.

That whole situation was a horrifying comedy of errors – if you like your comedy dark and threatening anyway.

If you recall, the fact that it didn’t become widespread in the US during the 2014 scare was NOT because it was handled properly. It was sheer luck. source

When American Patient Zero, Thomas Duncan, first showed up in a Texas emergency room, he wasn’t tested, despite the fact that he told them he was from Ebola-stricken Liberia. Proper practices were not followed, and one of the nurses who cared for him became the second victim. All sorts of near misses occurred, like the fact that the plane that carried an Ebola patient made FIVE trips before it was sanitized.

The news came out this morning that the second American nurse diagnosed with Ebola flew on a plane with 132 other passengers from Cleveland, Ohio to Dallas, Texas. Amber Vinson had a low-grade fever when she boarded the plane, and was admitted to Texas Presbyterian Hospital just hours after disembarking.

The latest horror? Not only were 132 people who flew with Vinson exposed to Ebola. In the time it took the CDC to notify Frontier Airlines of the issue, 5 more flights were made. (source)

That sounds like the plot of a cringe-y movie, where you watch the sneeze spray of an infected person in slow motion landing on everyone nearby. But that wasn’t the only mind-boggling thing that happened.

But that wasn’t the only mind-boggling thing that happened. We brought some exposed people back to the US and put them in hotels.

A couple of days ago an American healthcare worker who had been definitively diagnosed with Ebola was brought back to the US for treatment at the National Institute of Health (NIH) in Bethesda, Maryland. Eleven more patients have been isolated and are on their way to the United States as well, after having had “potential exposure” to the disease.

Now, about those people who were “potentially exposed”?

They aren’t being hospitalized. Oh no. They are being brought back to stay at hotels “near” three different hospitals in different regions of the country. I couldn’t make this up if I tried. (source)

So, I think we can all agree, looking to the National Institute of Health, the CDC, and the WHO to keep us “safe” is not the best fall-back plan. We have to be prepared to take action ourselves.

But you still need to pay attention.

While we don’t need to panic, there are many reasons we definitely need to pay attention and perhaps begin to lay in some supplies just in case we have an outbreak in the United States. Knowledge is power, so also pick up this incredibly well-written book about preparing for pandemics.

The most effective method for protecting yourself and your family in the case of Ebola is to go into lockdown – also known as social isolation. I have a chapter about surviving pandemics in my newest book, Be Ready for Anything. The last time Ebola was a threat, I provided a list that readers complained was perpetually sold out. I updated that list day and night with products that were in stock. The point is, don’t wait until it’s already here and everybody else is panicking before you go and get your supplies.

Is Ebola going to make it back to the US?

In DRC, Ebola has a death rate of 2/3. Not great odds. It’s likely that if it struck the US the death rate wouldn’t be quite as bad, but hemorrhagic diseases like this are deadly in many, many cases.

Will it reach our shores again? It’s certainly not a long shot, what with global travel and asylum seekers from all over the world at our Southern border.

But without a crystal ball, any projection I make is just a guess. What you should know is that it’s possible, it’s probably more likely than being wiped out by a giant meteor, and you should prepare for it. Just in case.