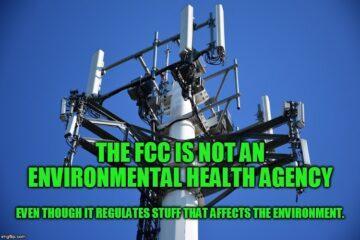 See how all these unconstitutional agencies have usurped power in order to become nothing more than organized crime, working with corporations to actually undermine the people and in some cases attack the people? We’ve been seeing it with the unconstitutional Food and Drug Administration with all the fraudulent “vaccines,” and we’re seeing it in the Federal Communications Commission as well. However, a recent ruling in favor of environmental health groups and petitioners said that the FCC is not doing its job in protecting the public from harmful wireless exposure.

The Federal Communications Commission (FCC) is supposed to protect Americans from the telecom and cable industries. Instead the agency has catered to these industries for decades (see 1, 2). Lawsuits have been filed against it for NOT protecting the public from unsafe levels of cell phone and WiFi radiation, 5G on Earth (see 1, 2, 3, 4, 5, 6), in space (see 1, 2) and also for allowing telecom and cable companies to overcharge Americans for decades.

Earlier this month, a federal court ruled in favor of organizations and petitioners that claim the agency is not adequately protecting the public from harmful wireless exposure.

Thanks to Environmental Health Trust for posting more details online about this as well as a video with excerpts from its press conference.

In an historic decision, the U.S. Court of Appeals for the District of Columbia Circuit judged in favor of environmental health groups and petitioners on Aug. 13, 2021, finding the Federal Communications Commission (FCC) violated the Administrative Procedure Act and failed to respond to comments on environmental harm. The court ruled that the decision by the FCC to retain its 1996 safety limits for human exposure to wireless radiation was “arbitrary and capricious.” and held that the FCC failed to respond to “record evidence that exposure to RF radiation at levels below the Commission’s current limits may cause negative health effects unrelated to cancer.” Further, the agency demonstrated “a complete failure to respond to comments concerning environmental harm caused by RF radiation.” The court found the FCC ignored numerous organizations, scientists and medical doctors who called on them to update limits and the court found the FCC failed to address these issues: On August 16, 2021, Environmental Health Trust held a Press Conference with Devra Davis PhD, MPH, EHT president; Dr. Hugh Taylor MD Chair of Obstetrics, Gynecology and Reproductive Sciences, Yale School of Medicine and Yale-New Haven Hospital and president of American Society of Reproductive Medicine; Edward B. Myers, EHT attorney; Theodora Scarato MSW, EHT Executive Director and a petitioner in the case; Frank Clegg, CEO of Canadians for Safe Technology and former President of Microsoft Canada; Paul Ben Ishai PhD, professor of physics at Ariel University in Israel; Cindy Franklin, founder of Consumers for Safe Cell Phones and a petitioner in the case, and Elizabeth Barris, director of the Peoples Initiative Foundation and a petitioner in the case.

Read about the lawsuit: https://ehtrust.org/transcript-of-press-conference-following-eht-federal-court-victory-over-fcc-wireless-radiation-safety-limits/ Read the transcript of the press conference: https://ehtrust.org/transcript-of-press-conference-following-eht-federal-court-victory-over-fcc-wireless-radiation-safety-limits/ Human exposure guidelines for wireless radiation were last set in 1996. Mr. Clegg said that it’s time for the industry to come up with safer technology.

“I believe the time has come when we should follow the examples in the pharmaceutical, chemical, and transportation industries, where the companies who benefit from bringing their products to market are responsible to prove their products are safe. I believe the technology and telecommunications industry’s free ride must end, where all they have to do is say that they meet federal guidelines. In fact, studies show that two thirds of consumers hold their cell phones against their bodies, which in fact, break federal guidelines. Now there’s going to be an outpouring from my industry about how this cannot be done, how expensive it will be, and how unrealistic, then based on experience, industry will get to work, and I believe will provide wireless products that are both safe and effective. … “Contrary to the assertion that 5G will be harmless because the skin provides a protective barrier, the fact is that 5G will use a wide range of frequencies. This includes the lower frequencies used by 2G and 3G found to cause cancer by the aforementioned national toxicology program. These these frequencies can also penetrate deeply into the brain. In addition, 5G can also use higher frequency millimeter waves which are absorbed in the skin. Some of the frequencies used by 5G are used by the US and Israeli military for crowd control, their active denial systems. Furthermore, the explosion of smart devices also requires the more dense 4G LTE networks, resulting in ever increasing public exposure to a panoply of RF R frequencies. Some models that we’ve seen show a small cell antenna every 100 yards in a dense population area.”

In May, scientists submitted a letter to President Biden asking him to protect the public from 5G and other unsafe technology. Americans who oppose 5G may click here to sign a letter asking the Biden administration to stop deployment immediately.