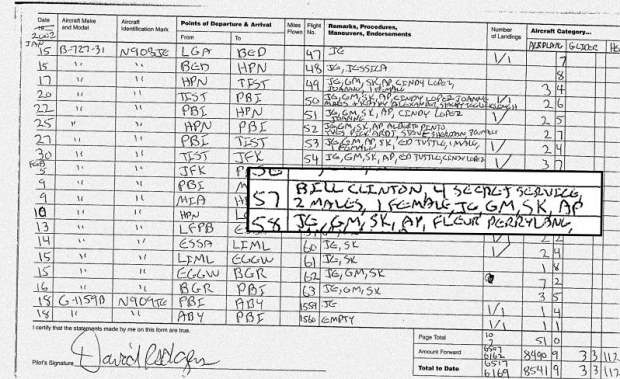 The rich and famous pals of suicided sex-offender Jeffrey Epstein are in a panic because every passenger on his flight logs will be named.

Christopher Bucktin reports for the UK Mirror, Sept. 20, 2020, that Denise George, the attorney general of the U.S. Virgin Islands where Jeffrey Epstein’s pedo island is located, has subpoenaed the logs for every flight made by Epstein’s aircrafts (4 helicopters and 3 planes, including the infamous “Lolita Express”) over the course of 21 years, from 1998 to his supposed suicide last year.

In addition to the passenger lists, the subpoena also demands any personal notes the pilots made, the names and contact details of anyone who had worked for the pilots or who “interacted with or observed” Epstein or any passengers associated with him, as well as any “complaints or reports of potentially suspicious conduct”.

According to the Washington Examiner, the flight logs also show that Donald Trump had flown once in a plane owned by Epstein. On January 5, 1997, Trump joined Epstein, Epstein’s brother Mark, Ghislaine Maxwell, and others on a flight from Palm Beach International Airport to Newark Liberty International Airport.

Trump and Epstein were neighbors and friends in Palm Beach in the 1990s, though they eventually had a falling out. In July 2019, Bradley Edwards, a lawyer who represented Epstein’s victims, stated in court documents that Trump had barred Epstein from his Mar-A-Lago estate “because Epstein sexually assaulted an underage girl at the club.” (New York Post)

In July 2019, Bill Clinton released a press statement that he had taken a total of four trips on Epstein’s airplane in 2002 and 2003. But a Washington Examiner review of the flight manifest records shows that Clinton actually went on at least 27 flights on Epstein’s “Lolita Express” during at least six trips, not four.

Lawyers for Epstein’s victims say the Epstein flight logs that are revealed did not include flights made by chief pilot Larry Visoski, who flew for Epstein for more than 25 years.

According to the Mirror, a “legal source” said that the flight records that Attorney General George has subpoenaed “will make the ones [pilot David] Rodgers provided look like a Post-It note. There is panic among many of the rich and famous.”