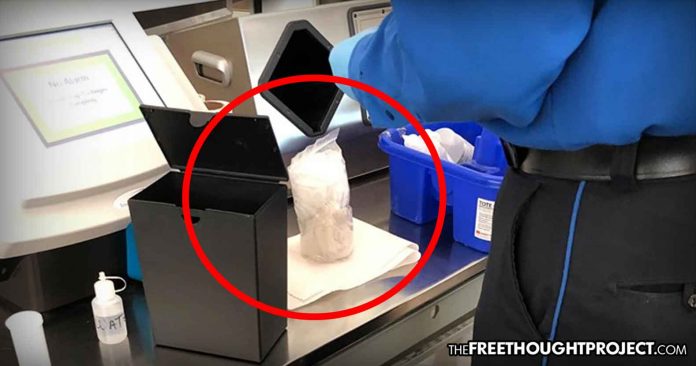 The TSA – whose job is supposedly “fighting terrorism” – is, without doubt, one of America’s most corrupt and incompetent agencies. However, last year, they apparently became so unsatisfied with the mere ability to strip search babies, remove colostomy bags, beat up blind cancer patients, and fondle your genitalia, that they announced a more invasive physical pat-downs. The pat-downs, which TSA warned would probably prompt assault complaints with the police department because of their invasive nature, have been implemented.

On top of aggressive pat downs and indiscriminate molestation of the young, old, and even trip amputees, the TSA can and will search the remains of your dead loved one. Last year, the TSA made headlines when they reportedly spilled New York Giants player A.J. Francis’ mother’s ashes during a baggage search.

Sadly, it appears that the TSA did not learn their lesson and has struck again. Apparently not learning from their previous mistakes, the TSA is accused of destroying the ashes of David Mehler’s mother, who was transporting his mother’s cremains to Aspen to spread them.

Mehler posted the photo of TSA destroying his mother’s ashes to Facebook with the following caption:

THANKS FOR DESECRATING MY MOM’S (REXANNE BISHOP) REMAINS THIS MORNING IN THE DENVER INTERNATIONAL AIRPORT WHILE MY TSA PRE-CHECK APPROVED BROTHER (DANIEL MEHLER) TRAVELS TO ASPEN TO SPREAD HER ASHES!

REALLY HELPS THE GRIEVING PROCESS WHEN YOU SEE SOMEONE OPEN THE URN, TEAR OPEN THE INTERIOR BAG, AND TEST HUMAN REMAINS.

THIS IS TOTALLY UNACCEPTABLE!!!!

According to the TSA’s website, their policy is to X-Ray the cremains and only if they find something in the X-Ray, do they move the cremains to further screening.

TSA HAS A CLEAR PROCESS FOR SCREENING CREMATORY REMAINS. OUR OFFICERS ROUTINELY CONDUCT THESE TYPES OF SCREENINGS THROUGHOUT OUR NATION’S AIRPORTS. CREMATORY REMAINS IN CARRY-ON MUST PASS THROUGH THE X-RAY MACHINE TO BE SCREENED. IF THE X-RAY OPERATOR CANNOT CLEAR THE REMAINS, TSA MAY APPLY OTHER, NON-INTRUSIVE MEANS OF RESOLVING THE ALARM. IF THE OFFICER CANNOT DETERMINE THAT THE CONTAINER DOES NOT CONTAIN A PROHIBITED ITEM, THE REMAINS WILL NOT BE PERMITTED.

WE UNDERSTAND THE EMOTIONAL STRESS PASSENGERS MAY BE UNDER WHEN TRANSPORTING THE REMAINS OF A LOVED ONE. OUR GUIDELINES FOR TRAVELING WITH CREMATORY REMAINS ARE NOT INTENDED TO MAKE THIS ALREADY EMOTIONALLY DIFFICULT PROCESS MORE COMPLEX THAN NEEDED. HOWEVER, CREMATORY REMAINS ARE ONE OF THE MANY SENSITIVE ITEMS THAT COULD BE EXPLOITED BY SOMEONE WANTING TO CONCEAL A DANGEROUS ITEM. TSA OFFICERS ARE TRAINED TO TREAT ALL TRAVELERS’ BELONGINGS WITH CARE AND RESPECT AND WILL NOT OPEN CONTAINERS WITH CREMATED REMAINS, EVEN IF THE PASSENGER REQUESTS THIS BE DONE.

The TSA, who has never stopped a terror attack and is unable to stop 95 percent of the tests against its tactics, gropes and molests children and adults alike — who unquestioningly accept it. And now, it appears they couldn’t care less about destroying a grieving son’s cremains of his mother.

As TFTP has previously reported, when the TSA isn’t destroying cremains, they are molesting the elderly — even 84-year-old survivors of the holocaust.

Eva Mozes Kor exposed her abuse by TSA in a Tweet last March, explaining how she was forced to undergo a “very demeaning body search” just to board a plane. In her Tweet, she drew a parallel with the TSA and Auschwitz.

Kor was traveling back home after giving a lecture on the horrors of Auschwitz when she said she was able to survive being in a concentration camp but could barely survive the abuse she suffered at the hands of TSA.

“Another very demeaning body search by the TSA – there has to be some way that at age 84 I can get some clearance by the POWERS of Government from this procedure. As I lecture about surviving Auschwitz I barely survive the TSA body search I detest it. That ruined my experience,” wrote the 84-year-old.

Another very demeaning body search by the TSA – there has to be some way that at age 84 I can get some clearance by the POWERS of Government from this procedure. As I lecture about surviving Auschwitz I barely survive the TSA body search I detest it. That ruined my experience

When the very people who lived during the time of Hitler’s regime—including those who fought against it and survived in it—are telling us about how the United States is heading down this dark path, it may be time to start listening to their warnings.