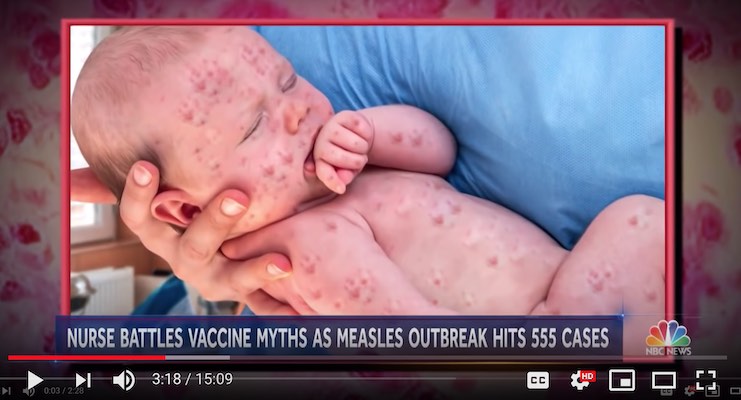 In the midst of what is being referred to as the worst measles outbreak in 25 years, the mainstream media is doing their part in stoking national hysteria. The point is to convince the general public that measles is the number one health crisis at the moment, and that it is so bad that we must forfeit our right to health freedom and submit to state-sanctioned, forced vaccinations.

Never mind that there a thousand more pressing and more dangerous health crises to address. Not the least of which is the fact that pharmaceutical drug overdoses kill tens of thousands of Americans every year, with over 70,000 preventable deaths in 2017 alone.

Never-the-less, the mainstream media is doing everything it can to create hysteria, even doctoring photos of newborn babies, giving them scary measles looking sores to dupe the public into demanding the government take action. But they are faking photos. They are presenting evidence that is fake, as though it were real, when it is not.

In a clip from a news segment originally aired on CNN, a stock photo of a healthy baby was photoshopped with measles sores, then shown on air along with the message the anti-vaccination information is dangerous.

Here is a screenshot taken from the CNN segment in question:

Here is the original stock photo, before the image was doctored:

YouTube reporter Nathan Stolpman digs into this travesty in the following video, analyzing the photos, and showing how the same fake photo has been used by at least CNN, NBC, and The Times of Israel. Please take a look and share far and wide.

What are your thoughts on this? Should these news sources be banned from social media, YouTube and other platforms for clearly spreading fake news?

Vic Bishop is a staff writer for WakingTimes.com. He is an observer of people, animals, nature, and he loves to ponder the connection and relationship between them all. A believer in always striving to becoming self-sufficient and free from the matrix, please track him down on Facebook.

This article (CNN and NBC Caught Faking Photo of Baby with Measles to Stoke Mass Hysteria) was originally created and published by Waking Times and is published here under a Creative Commons license with attribution to Vic Bishop and WakingTimes.com. It may be re-posted freely with proper attribution, author bio and internal links.