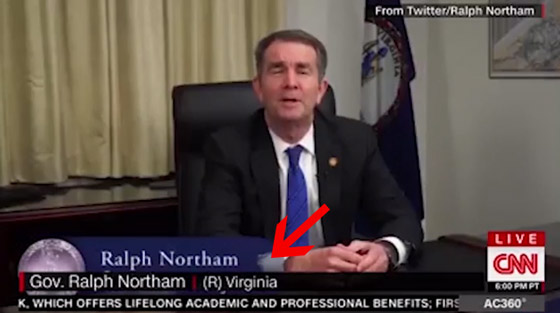 You’re likely aware that recently surfaced yearbook photos of Democrat Virginia governor Ralph Northam show him standing either in black face or a KKK hood. How these pictures never made it into the media during his election is a story all unto itself, especially considering that yearbooks are now the go-to investigative strategy used by media operatives, as we saw recently during the Brett Kavanaugh hearings.

Following the revelations of his racist past, Northam first appeared to admit that it was him in the photos and apologized for his actions, only to come out today to suggest that he is neither of the men pictured.

Democrats quickly began to distance themselves from the Governor, and media pundits tried to excuse away his behavior, with some suggesting that there is no reason to dig up old high school or college pictures.

CNN, for its part, took a completely different approach and has attempted to rewrite history by suggesting that Northam is not actually a Democrat, but rather, a Republican:

CNN aired a chyron Friday evening labeling Virginia Democrat Gov. Ralph Northam a Republican during a report on the Virginia Democrat apologizing for a racist medical school yearbook photo depicting two men— one of them himself— in blackface and Ku Klux Klan garb.

The chyron aired at 9:00 p.m. EST during a CNN broadcast of Anderson Cooper 360, which showed a video of Northam addressing the inflammatory yearbook photo in a video posted to his Twitter account.

Watch the video with the chyron here: