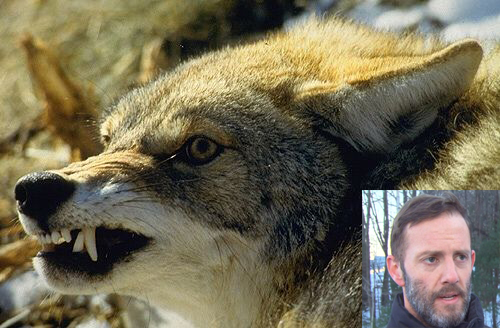 It was supposed to be a nice hike through the woods for the O’Reillys and their three children when their serenity was ruptured by a rabid coyote attacking their young son. If you know anything about rabies, you know that animals infected feel little or no pain. Kicking, hitting, sometimes even shooting a rabid animal won’t deter its fevered assault. All fear is gone and there is nothing left but aggression. A rabid dog, skunk or raccoon is as close to a Zombie as you’ll find, and yes, you normally need to shoot it in the head to kill it.

This particular coyote had been making the rounds in that area, including attacking a car and breaking into a Kensington home’s screened-in porch and biting a woman on the rear end. Before police could get there, the animal had wandered off in the direction of the O’Reilly family, some three miles away.

Who Killed the Whistleblower’s Wife?

When it attacked, the coyote managed to pull O’Reilly’s son to the ground by his jacket hood, but Mom was quick and got him and the other two children away before they could be bitten. That left the Dad, Ian, to deal with the snarling menace. Rabies and sharp teeth didn’t stop Ian from fighting the coyote to keep it away from his family.

“There was no running away. It was very much the aggressor,” Ian explained.

In the melee, Ian was bitten on the arm and chest before he was able to kick the animal in the jaw and send it to the ground so he could pounce on it. Once he had some control over the coyote, he proceeded to strangle it until it was no longer a threat. Are you getting the visuals on this? Can you imagine trying to hold a wild, twisting, snapping rabid animal in place long enough to choke the life out of it? I have trouble holding my ranch dogs still at the vet!

Pelosi’s Impeachment Charade is Nothing More Than a Juvenile Insult

What was going through Ian’s mind during this struggle? In his words, “In the moment you don’t really pay attention to what is going on. You just try to go with whatever goes through your brain, instincts I guess.” I’d say this dad’s instinct to protect his family was strong, as was the mother’s!

The New Hampshire gun laws are pretty liberal. I think I might be packing on hikes in the area, especially since rabies is a problem there. The O’Reilly son was bitten by a rabid raccoon last year in their yard. You might even bring one of these along.

Authorities are warning people there may have been more than one rabid coyote involved in these attacks, considering the distance between them. Pack animals (wolves/coyotes) and den animals(fox) spread the rabies virus quickly to one another.

One thing is certain, the O’Reilly children will always see their dad as a real-life Hero action figure.

For more on this story go here