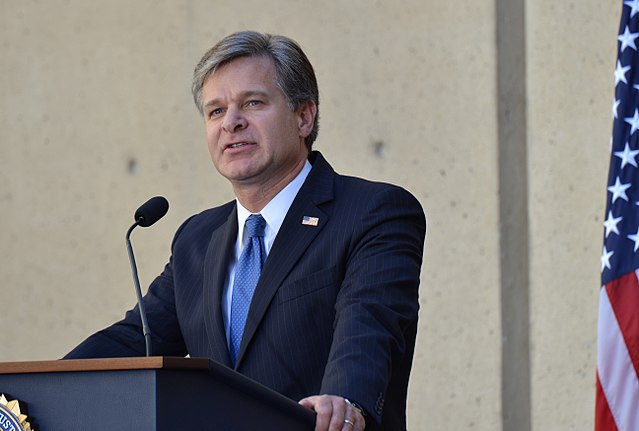 After hearing how the pro-American group the United Constitution Patriots caught hundreds of illegal aliens invading our southern border in New Mexico earlier this week, the FBI moved immediately to arrest one of their alleged members on a gun charge.

The FBI on Saturday arrested a man connected with an armed group that has been detaining migrants in New Mexico, the state attorney general’s office said.

Larry Mitchell Hopkins, 69, of Flora Vista, New Mexico, was arrested for allegedly being a felon in possession of a weapon, New Mexico Attorney General Hector Balderas and the FBI said. […] The FBI Albuquerque division said that Hopkins, who is also known as Johnny Horton Jr., was arrested with the assistance of the Sunland Park Police Department.

The FBI said he was arrested on a federal complaint charging him with being a felon in possession of firearms and ammunition. It was not immediately clear what the underlying conviction was.

The FBI said that no other information would be released until after Hopkins has his initial court appearance, which is expected Monday at 10:30 a.m. at U.S. District Court in Las Cruces. The FBI in its statement did not mention anything about an armed group stopping migrants near the border.

It only took them less than one week to arrest an alleged member of the United Constitutional Patriots for daring to try and protect our southern border.

This, at a time when illegal immigration and the border crisis has never been worse.

The Democrats in New Mexico and the liars in the media love saying these people have no “right” to protect our border.

First off, every indicator shows they already knew that. They simply asked these illegal aliens to stop and they did. They then called border patrol.

Odds are the border patrol just booked the illegal aliens they caught and released them throughout our country, as those are our laws now under President Trump.

The idea American citizens don’t have the right to protect their borders is laughable in itself and reflective of how backwards our society truly is. These illegals are invading our homes. We have a right to defend our homes with force and we have a right to protect our borders. Citizen’s arrests are a rich part of American history and they’re becoming more relevant than ever now that our government is refusing to uphold the law.

Never forget, the same government which claims the right to bomb every nation on earth preemptively and launch full-scale ground invasions of countries like Venezuela because we don’t like their leaders claims Americans have no right to defend our own border.

There’s a reason they’re hitting Hopkins with a gun charge rather than kidnapping. They didn’t actually do anything wrong.

That said, there’s a good chance the FBI and the authorities in New Mexico will move against them illegally and make up fake charges to persecute them with, as the FBI just did with all of President Trump’s campaign associates.

Our government is now operating under what the late paleoconservative writer Sam Francis called, “Anarcho-Tyranny.”

As Francis described it: “What we have in this country today, then, is both anarchy (the failure of the state to enforce the laws) and, at the same time, tyranny — the enforcement of laws by the state for oppressive purposes; the criminalization of the law-abiding and innocent through exorbitant taxation, bureaucratic regulation, the invasion of privacy, and the engineering of social institutions, such as the family and local schools; the imposition of thought control through ‘sensitivity training’ and multiculturalist curricula, ‘hate crime’ laws, gun-control laws that punish or disarm otherwise law-abiding citizens but have no impact on violent criminals who get guns illegally, and a vast labyrinth of other measures. In a word, anarcho-tyranny.”

“The laws that are enforced are either those that extend or entrench the power of the state and its allies and internal elites … or else they are the laws that directly punish those recalcitrant and ‘pathological’ elements in society who insist on behaving according to traditional norms — people who do not like to pay taxes, wear seat belts, or deliver their children to the mind-bending therapists who run the public schools; or the people who own and keep firearms, display or even wear the Confederate flag, put up Christmas trees, spank their children, and quote the Constitution or the Bible — not to mention dissident political figures who actually run for office and try to do something about mass immigration by Third World populations.”