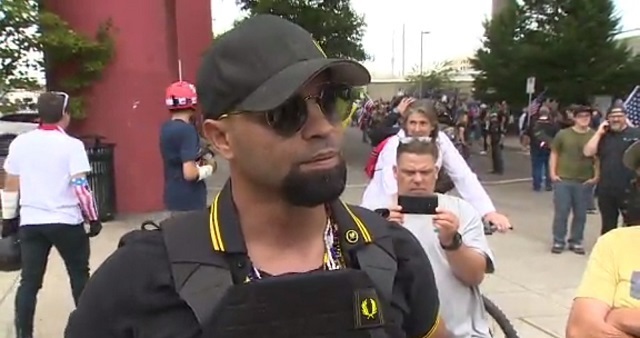 Proud Boys leader Enrique Tarrio, one of the lead organizers of the Capitol protest and a top “opposition” leader who made headlines for the past two years, was a “prolific” informant for the FBI and local law enforcement for years, according to a court transcript obtained by Reuters.

Exclusive: Enrique Tarrio, the leader of the Proud Boys, has repeatedly working undercover for investigators, according to a federal court transcript. @reuters https://t.co/AFYBLGuSrr

Enrique Tarrio, the leader of the Proud Boys extremist group, has a past as an informer for federal and local law enforcement, repeatedly working undercover for investigators after he was arrested in 2012, according to a former prosecutor and a transcript of a 2014 federal court proceeding obtained by Reuters.

In the Miami hearing, a federal prosecutor, a Federal Bureau of Investigation agent and Tarrio’s own lawyer described his undercover work and said he had helped authorities prosecute more than a dozen people in various cases involving drugs, gambling and human smuggling.

Tarrio, in an interview with Reuters Tuesday, denied working undercover or cooperating in cases against others. “I don’t know any of this,” he said, when asked about the transcript. “I don’t recall any of this.”

He doesn’t remember being an informant for multiple years. Very believable.

Law-enforcement officials and the court transcript contradict Tarrio’s denial. In a statement to Reuters, the former federal prosecutor in Tarrio’s case, Vanessa Singh Johannes, confirmed that “he cooperated with local and federal law enforcement, to aid in the prosecution of those running other, separate criminal enterprises, ranging from running marijuana grow houses in Miami to operating pharmaceutical fraud schemes.”

[…] The records uncovered by Reuters are startling because they show that a leader of a far-right group now under intense scrutiny by law enforcement was previously an active collaborator with criminal investigators.

It’s not that startling.

The leader of the Neo-Nazi terror group "The Base" was a fed. Imagine my shock. https://t.co/d9EtslUhzZ

The FBI also appears to have run the “white supremacist neo-nazi domestic terrorist group” known as The Base.

There’s no way that the FBI has not been fully aware for the past 2-3 years that Tarrio was an asset.

At the very least, the FBI has been sitting on this information for years.

We only know about it now because of Reuters.

Washington police arrested Tarrio in early January when he arrived in the city two days before the Capitol Hill riot. He was charged with possessing two high-capacity rifle magazines, and burning a Black Lives Matter banner during a December demonstration by supporters of former President Donald Trump. The D.C. Superior Court ordered him to leave the city pending a court date in June.

Though Tarrio did not take part in the Capitol insurrection, at least five Proud Boys members have been charged in the riot. The FBI previously said Tarrio’s earlier arrest was an effort to preempt the events of January 6.

Seems more likely Tarrio’s arrest was an attempt to protect one of their assets.

The transcript from 2014 shines a new light on Tarrio’s past connections to law enforcement. During the hearing, the prosecutor and Tarrio’s defense attorney asked a judge to reduce the prison sentence of Tarrio and two co-defendants. They had pleaded guilty in a fraud case related to the relabeling and sale of stolen diabetes test kits.

The prosecutor said Tarrio’s information had led to the prosecution of 13 people on federal charges in two separate cases, and had helped local authorities investigate a gambling ring.

Tarrio’s then-lawyer Jeffrey Feiler said in court that his client had worked undercover in numerous investigations, one involving the sale of anabolic steroids, another regarding “wholesale prescription narcotics” and a third targeting human smuggling. He said Tarrio helped police uncover three marijuana grow houses, and was a “prolific” cooperator.

In the smuggling case, Tarrio, “at his own risk, in an undercover role met and negotiated to pay $11,000 to members of that ring to bring in fictitious family members of his from another country,” the lawyer said in court.

In an interview, Feiler said he did not recall details about the case but added, “The information I provided to the court was based on information provided to me by law enforcement and the prosecutor.”

There is no evidence Tarrio has cooperated with authorities since then. In interviews with Reuters, however, he said that before rallies in various cities, he would let police departments know of the Proud Boys’ plans. It is unclear if this was actually the case. He said he stopped this coordination after December 12 because the D.C. police had cracked down on the group.

There’s plenty of evidence he advanced the media and FBI’s narratives. The Proud Boys turned the face of the right into some gay activist street fighting group (that’s a link to when they flashed the media wearing kilts with “F**k antifa” scrawled on their butts with Tarrio grinning from ear to ear in the center). “A source within the Proud Boys says the local chapters are using the hashtag to recruit more pro-Trump gay men, calling the initiative ‘Strike while the iron’s gay’.” My column in today’s @SpectatorUSA https://t.co/uNvEZOPUt5

The Proud Boys are associated with white nationalists, who are usually associated with antisemitism. And yet there's an Israeli chapter. "Israelis could be attracted to the Proud Boys because of the value placed on masculinity in Israel," said a source.https://t.co/GMDMD1ifG6 pic.twitter.com/dU0EOteLlL

There were a lot of red flags.

Other than when they were being attacked by antifa, very few people wanted to defend them.

That said, I don’t doubt there was probably plenty of well meaning people who got caught up in the group because they didn’t understand what was going on and just liked the idea of people fighting back against antifa.

Tarrio on Tuesday acknowledged that his fraud sentence was reduced, from 30 months to 16 months, but insisted that leniency was provided only because he and his co-defendants helped investigators “clear up” questions about his own case. He said he never helped investigate others.

That comment contrasts with statements made in court by the prosecutor, his lawyer and the FBI. The judge in the case, Joan A. Lenard, said Tarrio “provided substantial assistance in the investigation and prosecution of other persons involved in criminal conduct.

Folks, there’s almost no way this guy is not still an FBI informant.

I remember when he was arrested in DC thinking how bizarre it was he would bring two so-called “high capacity” magazines into DC and then openly admit he intended to “sell” them upon being arrested.

Wow. Proud boys leader Enrique Tarrio was a snitch? Explains his quick arrest and expulsion before the Storming of the Capitol. Keeps him safe and allows FBI to roll up the group with solid inside intelligence. https://t.co/Wj4viHnuBf

This is “Operation Trust” all over again.

Many of the Proud Boys were involved in the breaching of the Capitol:

Incidentally, at the end of the video Tarrio and his pals are seen wearing “FBI” hats during a recent podcast: Folks like Joe Biggs and other Proud Boys who got caught up with this FBI informant are now facing prison:

Proud Boys organizer Joseph Biggs arrested in Florida in connection to riot at the Capitol. https://t.co/5evG69mszd

Tarrio released this non-denial denial on Telegram where he admitted he was an informant — after previously claiming he had no recollection — and claimed he’s been totally open about it.

A lot of questions have been raised about whether John Sullivan, the phony “BLM activist” who was seen encouraging people to destroy stuff while in the Capitol, was an informant or agent provocateur as well.

I studied video shot by Sullivan (Jayden X) in the Capitol and compiled some moments of him zealously celebrating the invasion & instigating the mob all the way up to Ashli Babbit's shooting. Watch with audio on.

No committed BLM activist would say or do this – and he isn't one pic.twitter.com/uE5VmUf6mU

The Daily Mail reported Wednesday that another protester, 27-year-old Christoper Ortiz, was busted with the help of an FBI informant.

Long Island man, 27, charged with taking part in the Capitol riot claims he is NOT a Trump supporter and was in DC to 'understand' MAGA insurgents
🙄 https://t.co/cpGgCkqyUA

While the media is celebrating the outing of Tarrio, none of them are asking the most important question: what role did the FBI and their informants have in organizing the “storming” of the Capitol?

How much of a role, if any, did government agents play in spreading the Q-Anon “Storm is Coming” psy-op?

This whole “storming” incident is serving as the impetus to label everyone on the right “domestic terrorists.”

🚨BREAKING:Lawmakers in #Canada 🇨🇦 just voted *unanimously* to call on the government to declare the Proud Boys a #terrorist group.

Not a single dissenting vote.

We should have a right to know if FBI assets led this operation just like they appear to have led The Base.