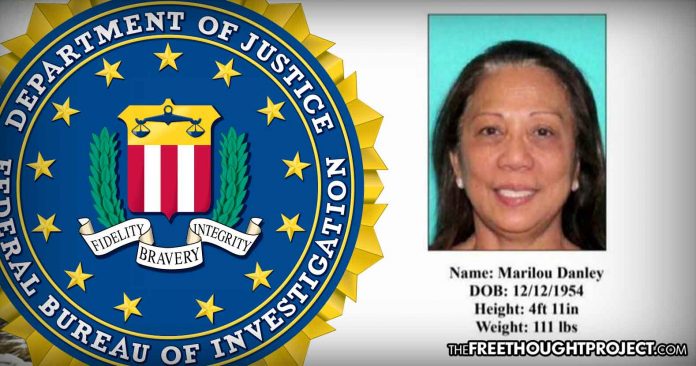 Las Vegas, NV — A bombshell revelation in regard to the massacre that took place last October in Las Vegas has surfaced this week, suggesting that Stephan Paddock’s girlfriend, Marilou Danley could’ve been an FBI asset. According to a credit application, as reported by True Pundit, Danley listed the FBI as an employer.

This is the same Danley whose fingerprints were found on the ammunition used to murder 58 people on 1 October. The same Danley who admitted to law enforcement that she helped Paddock load the magazines Paddock would use that fateful night.

This is the same Danley who was reportedly visiting family in the Philippines at the time, and set her Facebook account to private at 12:38 a.m. and then deleted it entirely at 2:46 a.m.—nearly one hour before Paddock’s name was publicly released as the suspect in the shooting. The same Danley whose player’s card Paddock was using the night her murder those people.

According to the publicly available intelligence obtained from a consumer credit reporting bureau, Danley claimed she previously worked at the FBI. While anyone can certainly claim anyone else as an employer, according to True Pundit, they contacted the FBI who said their “bosses are concerned” over this revelation.

When contacted Friday, one FBI source said the Bureau “might have made payments to Danley but it is above my level,” the source said referring to access to the FBI’s confidential informant participant and payment records. The source said “bosses are concerned” with the new revelations about Danley’s financial relationship with the FBI.

In FBI speak, Danley could have been a paid asset. And ‘concerned’ means folks are getting ready to cover their own butts if payments were made to Danley either before or after the massacre.

Or Danley. If you can find her. It took the FBI days to locate her and interview her after the Mandalay Bay massacre.

Danley is an Australian national. She is not a U.S. citizen.

Of course this bombshell Intel is coming from FBI sources in the beltway, not the corrupt Las Vegas FBI field office headed by Aaron Rouse. The same FBI field office that has not been able to pinpoint a motive for the Oct. 1, 2017 massacre that killed 57 people.

Little wonder why the narrative doesn’t fit the crime if the person whose fingerprints are on the ammunition also happens to be on your FBI payroll.

If this new revelation is true, and Danley did in fact work for the FBI, it raises far more questions than answers. In a case that has been shrouded in mystery and narrative changes, the idea that the person closest to the suspect in the deadliest mass shooting in modern history, could possibly be an asset to the FBI, is chilling.

For a list on all the revelations and cover-ups on which the Free Thought Project has reported, you can view our archives on the case, here.