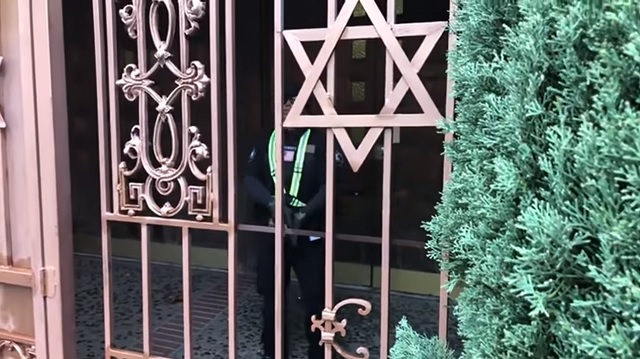 A “First Amendment auditor” was shot and called a “Nazi” for filming outside of a synagogue in Los Angeles on Thursday.

A security guard protecting a synagogue in Los Angeles ordered a transgender woman standing on a public sidewalk with a camera to “get away” before shooting her in the leg.

“F**ker shot me. F**ker shot me in the leg,” exclaimed Zhoie Perez, who runs the YouTube channel Furry Potato Live., part of a growing movement of First Amendment auditors who record public officials and security guards in public to test their knowledge of the First Amendment.

The security guard evidently failed the audit, ordering her away after he shot her, claiming it was only a warning shot for refusing his order.

He has since been arrested and charged with aggravated assault with a deadly weapon.

He was identified as 44-year-old Edduin Zelayagrunfeld, according to ABC7.

“I was just filming the exterior of the synagogue and getting a lot of the architecture and all that,” Perez said.

After the shooting, she got down on the sidewalk and behind a car. She says the security guard came out and continued to confront her.

“He leaves the gate, comes out on the sidewalk with his gun drawn again and says ‘Try to break in. That was a warning shot, I’ll kill you for real next time,'” Perez recalled.

Perez was treated and released at a local hospital with a gunshot wound to her leg.

You can hear in the video the security guard calls Perez a “Nazi” repeatedly after firing the shot.

This is where the First Amendment is now at in the New America™.