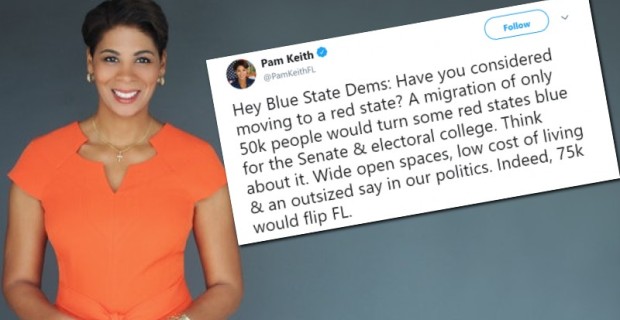 Losing congressional candidate Pam Keith has a cunning plan for Democrats to win red states – by encouraging tens of thousands of leftists to move there in huge numbers.

“Hey Blue State Dems: Have you considered moving to a red state? A migration of only 50k people would turn some red states blue for the Senate & electoral college. Think about it. Wide open spaces, low cost of living & an outsized say in our politics. Indeed, 75k would flip FL,” tweeted Keith.

Hey Blue State Dems: Have you considered moving to a red state? A migration of only 50k people would turn some red states blue for the Senate & electoral college. Think about it. Wide open spaces, low cost of living & an outsized say in our politics. Indeed, 75k would flip FL.

After another leftist suggested it would be “tough to move to a place with close minded neighbors,” Keith responded by suggesting “an Amish approach” of moving whole communities at a time.

I know. But I am advocating an Amish approach. Move as a community, several families at a time to bring work and support. It makes a difference

“Maybe try voting red in your own state to support the same policies that make red states better places to live,” responded one user.

Keith appeared to be ignorant of the fact that if tens of thousands of Democrats left a blue state, that state might have a chance of turning red.

“The nerve of these people. What’s especially hilarious about her tweet is the very things she claims as incentives for moving to red states would go bye-bye if Democrats run them. C’mon, the reason there are wide open spaces and a low cost of living is because of those evil red-state policies,” commented Hot Air.

According to the Dallas Morning News, if current immigration trends continue, Texas could turn blue in 2020, with other states potentially to follow.