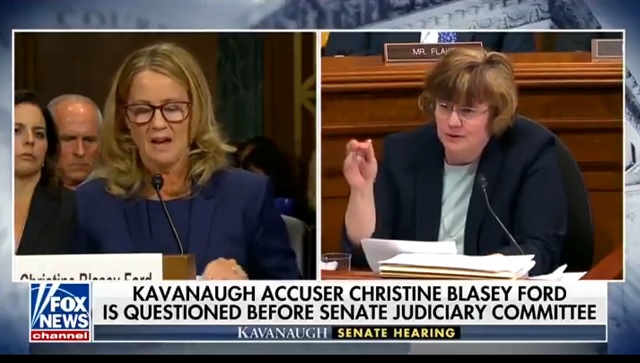 Christine Blasey Ford admitted under oath Thursday before the Senate Judicial Committee that her supposed “fear of flying,” which she used an excuse to successfully delay Brett Kavanaugh’s confirmation hearings, did not stop her from flying all over the place over the last two months and jet-setting to exotic locations all around the world to surf in the past.

This is what Ford had her friend tell the media last week, as ABC News reported:

[L]awyers for Ford are asking the Senate Judiciary Committee to schedule a hearing for her to be heard on Thursday, allowing time for Ford to make the drive from California to Washington D.C. Ford’s friend, Kate Devarney, told CNN this week that Ford’s fear of flying is directly related to her allegation of assault, and that an airplane is “the ultimate closed space where you cannot get away.”

Despite Dr. Ford's reported fear of flying (which was her excuse for not being able to testify in a timely manner before the Senate Judiciary) she admits she traveled to DC in a plane. pic.twitter.com/suaLy4yguD

Rachel Mitchell: May I ask, Dr. Ford, how did you get to Washington?

Ford: In an airplane.

Mitchell: I ask that because it’s been reported by the press that you would not submit to an interview with the committee because of your fear of flying. Is that true?

Ford: Well, I was willing—I was hoping they would come to me, but I realized that was an unrealistic request.

Mitchell: It would have been a quicker trip for me.

This is huge. The Republicans made it abundantly clear from the very start that they were eager to send a team out to speak with her at her home in Palo Alto. Chairman Chuck Grassley pointed this out shortly after Ford’s comments.

To say she was “hoping they would come to me” is pure nonsense.

Every day this hearing was delayed makes it that much more likely Trump won’t be able to nominate another judge to the Supreme Court if Kavanaugh’s nomination falls through.

Ford and her team lied about the reasoning she gave to delay this hearing and she just lied about it under oath!

Ford: Yes. So that was certainly what I was hoping to avoid, having to get on an airplane, but I eventually was able to get up the gumption with the help of some friends and get on the plane.

Mitchell: When you were here in the mid-Atlantic area back in August, end of July, August, how did you get here?

Ford: Also by airplane. I come here once a year during the summer to visit my family. I’m sorry, not here, I go to Delaware.

Mitchell: Okay. In fact, you fly fairly frequently for your hobbies and you’ve had to fly for your work, is that true?

Mitchell: You were consulting by a statistician in Sydney, Australia, is that right?

Ford: I have never been to Australia, but the company that I work for is based in Australia and they have an office in San Francisco, California. I don’t think I’ll make it to Australia.

Mitchell: It is long. I also saw on your CV that you list the following interest of surf travel and you put Hawaii, Costa Rica, South Pacific Islands and French Polynesia. Have you been to all of those places?

Mitchell: And your interests also include oceanography, Hawaiian and Tahitian culture. Did you travel by air as a part of those interests?

Ford: Correct. It’s easier for me to travel going that direction when it’s a vacation.

She later said she took another flight after her polygraph test on August 7th from BWI to New Hampshire.

In just the last two months, Ford flew — at the very least — from California to Delaware then from Maryland to New Hampshire and back to California and then back to Washington DC for today’s hearing.

This woman is flying on planes seemingly every week but we’re supposed to believe she has some paralyzing fear of flight which forced the delay of these Senate Judiciary Committee hearings!