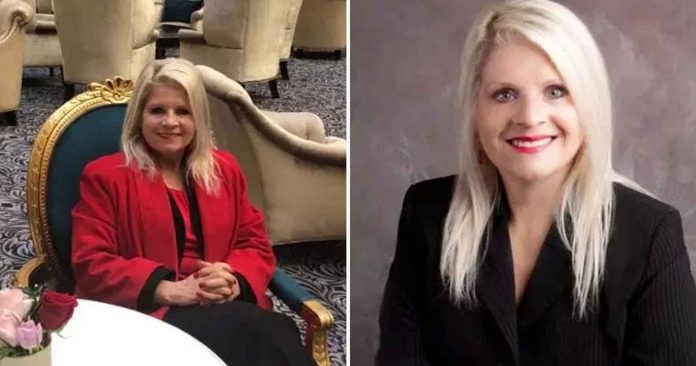 A former Arkansas state senator, Linda Collins-Smith was found murdered in her home last week in Pocahontas, Arkansas. According to reports, Collins-Smith was closing in on a child trafficking ring which was being run by the Arkansas government.

According to police, last week, Collins-Smith was shot and killed outside of her home in Pocahontas, about 130 miles northeast Little Rock. She died of a gunshot wound and her body was found wrapped in a blanket. Her death is being investigated as a homicide. No other information has been publicly presented.

According to CD Media:

A VERIFIED SOURCE CLOSE TO COLLINS-SMITH TOLD CD MEDIA THAT SHE WAS ABOUT TO GO PUBLIC WITH INCRIMINATING INFORMATION ON SITTING JUDGES IN ARKANSAS, WHO WERE INVOLVED IN TAKING CHILDREN FROM POOR WOMEN VIA THE DEPARTMENT OF HUMAN SERVICES (CHILD PROTECTIVE SERVICES) IN ARKANSAS AND SELLING THEM TO WEALTHY INDIVIDUALS. THE SOURCE ALSO DISCLOSED THAT COLLINS-SMITH BELIEVED THE PERPETRATORS WERE USING ILLEGAL ALIENS TO FACILITATE THE CRIMES WHICH INCLUDED MURDERING THE MOTHERS OF THE STOLEN CHILDREN.

Indeed, during her time in the Senate, Linda Collins-Smith had worked on legislation and was the primary sponsor of HB1923, which became Act 922. The bill was drafted specifically to prevent human trafficking.

A release by the National Foundation for Women Legislators acknowledged Collins-Smith work on the legislation.

ARKANSAS STATE REPRESENTATIVE CHARLOTTE DOUGLAS WAS RECOMMENDED TO ATTEND THE SUMMIT BY HER COLLEAGUE, NFWL STATE DIRECTOR ARKANSAS STATE SENATOR LINDA COLLINS-SMITH. SENATOR COLLINS-SMITH SUGGESTED REPRESENTATIVE DOUGLAS, DESCRIBING HER AS A LEADER IN THE FIGHT TO END HUMAN TRAFFICKING IN ARKANSAS. UPON RETURNING HOME FROM THE SUMMIT, REPRESENTATIVE DOUGLAS BEGAN WORKING ON LEGISLATION WITH TRUCKERS AGAINST TRAFFICKING TO PROVIDE TRUCK DRIVERS WITH THE INFORMATION THEY NEED TO COMBAT HUMAN TRAFFICKING AS THEY WITNESS ITS OCCURRENCE. TO RECEIVE A CLASS A COMMERCIAL DRIVER’S LICENSE, NEW ARKANSAS LEGISLATION OUTLINES THAT DRIVERS MUST COMPLETE A BRIEF ONLINE COURSE ABOUT HUMAN TRAFFICKING PREVENTION. ARKANSAS IS THE FIRST STATE TO ENACT THIS LEGISLATION, AND NFWL IS IMMENSELY PROUD THAT OUR SUMMIT LED TO THIS LEGISLATIVE VICTORY.

Adding to the suspicious nature of her death, officials have reportedly issued a gagging order over the investigation into her murder.

“Third Judicial District Court Judge Harold Erwin issued an order sealing the documents and statements obtained by police during the pendency of this investigation,” Prosecuting Attorney Henry H. Boyce said, according to KAIT.

Philip Smith, Linda Collins-Smith’s ex-husband was also a judge, who was forced to resign amid controversy.

Even more disturbing is the fact that just two days after Collins-Smith was killed, former Oklahoma State Sen. Jonathan Nichols was found dead in his home in Norman, 20 miles south of Oklahoma City. Like Collins-Smith, he died of a gunshot. According to CD Media, their source says the deaths are related.

While Collins-Smith’s work to expose the child trafficking ring is not confirmed, her record of being a thorn in the side of corrupt politicians is no theory. During her time as state senator, she made many enemies while trying to stop corruption in the government.

While a conspiracy by CPS to kidnap children and sell them to traffickers may sound outlandish, the Arkansas Department of Human Services has been implicated in multiple lawsuits for stealing children from caring families.

According to Arkansas online, the suit says that the department has subjected hundreds of families to this practice for years and that it isn’t only these individual caseworkers at fault. It seeks class-action status to represent all families similarly affected by Human Services Department actions.

“This is just the tip of the iceberg,” one of the families’ attorneys, Lucian Gillham of Benton, said. “There are so many cases like this where parents lost their kids.”

“These kids are being ripped away from everything they have ever known,” he added.

In just the US foster system, 18,000 children go “missing” every year. Many of those children are then sold into sex slavery.

Not only in Arkansas, but across the county, systems are set up to pull children from their families for ridiculous reasons and turn them over to for profit systems—funded by your tax dollars—that use these children as cash cows and have no incentive to keep them safe.

Last year, U.S. District Judge Timothy DeGiusti handed down a 15 year sentence to Ralph Shortey, a former senator from Oklahoma who was caught on camera with a child in a hotel room who he had sex with.

The fact of the matter is that child sex abuse in this country takes place on a massive scale and many within the system are some of the worst abusers. Those who speak out against it and attempt to expose the system, are often times killed or silenced.