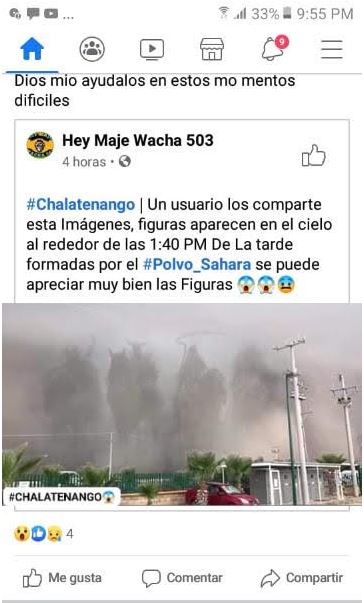 Yesterday, June 30, 2020, Spirit Daily posted a truly alarming image from social media of what appears to be the Four Horsemen of the Apocalypse in a Saharan dust storm over some place called Chalatenango:

See the 4 horsemen? Someone took a picture of that image formed from the dust happened at 1:40 in the afternoon in Chalatenango Mexico

But Spirit Daily does not give the source link or date of the apocalyptic social media post, nor are we told who Hey Maje Wacha 530 is.

So I did my research on the Internet and found the following:

(1) A huge sand storm from the Sahara Desert in North Africa, the third largest desert in the world after Antarctica and the Arctic. has made its way across the Atlantic, engulfing some Mexican cities and America’s Gulf coast states.

Here’s an NBC “Today” news video on the dust storm.

Shocking footage from Torreón, Mexico showed a huge wall of dust encompassing the entire city, sparking claims of the “apocalypse”. The sand storm from the Saharan Desert has reached North America after travelling across the Atlantic last week. Incredible videos of the sand storm hitting Mexico went viral, as the dust blocked out the sun and sparked travel chaos over visibility concerns….

The storm is expected to continue moving north and east through the weekend, reaching areas from Texas and Florida all the way up to as far north as the Canadian border.

Here’s a YouTube video of the dust storm over Torreón on June 24:

(3) An alert Facebook poster Orlando Elgordo Fernandez found the original undoctored image, which proves that the Four Horsemen image is a photoshop. The image wasn’t even taken in Chalatenango, but in Torreón, Mexico.

In fact, the Express article I referenced earlier in this post included the above image. The image is also in the NBC “Today” news video on the dust storm, from which I had this GIF made, showing there are no Four Horsemen of the Apocalypse in the dust storm.