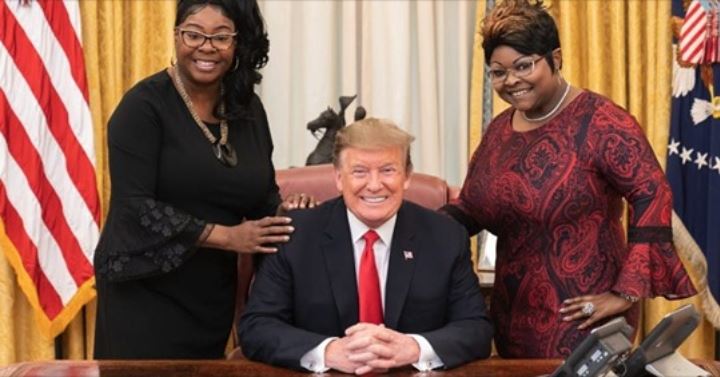 I’m sure you are all familiar with the dynamic duo, Diamond and Silk who became overnight sensations for their unique as well as funny perspectives for their support of Donald Trump.

The two sisters who were among the first African Americans to embrace Donald Trump’s 2016 presidential campaign, reveal in their new book titled “Uprising: Who the Hell Said You Can’t Ditch and Switch?—The Awakening of Diamond and Silk” that FOX offered them $150,000 to ditch Trump and endorse another candidate.

They also elude to the possibility that racism could very well be the reason they were fired.

What in the hell is going on at FOX? They have turned into an anti-Trump news source with the exceptions of their major stars like Tucker Carlson, Sean Hannity, Jesse Watters and a few others.

Anyways, the girls turned down the ‘offer’ saying that the offer treated them as if “we were token blacks,” and that they never considered it.

Diamond and Silk revealed in their new book, Uprising, how they were offered $150,000 to stop supporting @realDonaldTrump
They Said No, "We Can't Be Bought!"

“Token blacks do what they’re told to do. We’re Diamond and Silk. We’re not token blacks, and we don’t owe anybody anything,” wrote Diamond.

“You got that right,” said Silk, adding, “No amount of money would have stopped us from stumping for Donald J. Trump.”

In a chapter provided to Secrets in advance of Tuesday’s release of the book from Regnery Publishing, they revealed the $150,000 bribe attempt for the first time, and they suggested that it was racially motivated.

“It’s the stereotype that if a black person is doing something, they must be getting paid for it. What they didn’t realize is that we knew what the Democrats were about. We knew how the Left operated. We weren’t accepting any of it,” wrote Diamond.

“None of it. We didn’t tell anybody about this. We didn’t make it public. We’re talking about it right now in our book so that y’all will know what Diamond and Silk have gone through and all of the different things that have come our way, but we continue to stand strong,” added Silk.

“I was furious. Where the hell was Fox? Where was their PR department? Why the hell didn’t they correct the lies published by The Daily Beast? Why didn’t Fox speak up?”

“Why were our Fox Nation videos dialed back because they were deemed overly political,” she continued, “but it was okay for others on the network to talk about politics, even down to asking some of the same questions we had? Why were we such a threat? We only did one video every week, and it was hidden behind a paid subscription wall. When you really think about it, was this part of the systemic racism that everybody was talking about?”

Again, FOX better watch themselves or they will be just another liberal fake news organization and will end up losing millions of viewers as well as a ton of cash.