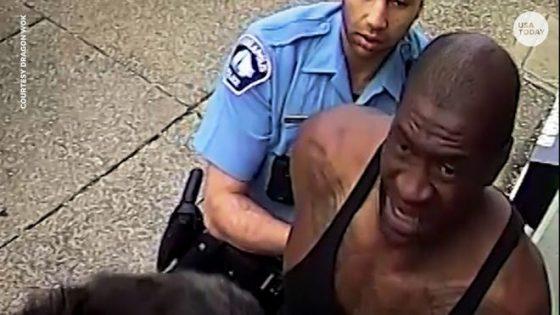 Video footage the MSM fake news conveniently kept out of their “breaking news story” has surfaced of George Floyd resisting arrest for around three minutes .

Would this have stopped the riots? No. Fake news had made their minds up. They were going do their part at destroying the country. They were sticking to the plan.

*”One of the most obvious ways to tell I’f a event could be faked is paying attention to the news release. It’s a dead giveaway when you see all the networks releasing the same exact story, at the same time.”

This video just adds to the long list of events that fake news got caught at “faking news”.

There you have it. Floyd did indeed resist arrest. The entire fake news complex lied to you, again. They specifically said Floyd didn’t resist arrest.

This is just another example why I quit believing everything the news media puts out.. Some might think that’s a little extreme. No. It’s the only logical, smart solution. The days of me saying “they lie sometimes but usually they are pretty honest” were gone long ago. If you say you can tell the difference simply by using your best judgement, all you are really doing is selecting what you feel comfortable with. That does not make it true.

People saw the video. They saw Floyd die.. Somebody mentioned in the comment section in a prior post of mine. Something along the lines that “it’s going to take more than different time stamps to change my mind”.

Five simple points, out of many.

I use the MSM as leads. Then I investigate the story myself. But to each their own.

Fake ot not , some have come out ahead because of Floyd’s death.

Minneapolis is home to the largest population of Somali in the USA. That means Muslim. You can be sure a Muslim controlled replacement for the police is ready to fill the spot.

I find it unusual that CUP FOODS is also the address of a Mosque. Yes, they have a Mosque in the basement. An “underground Mosque”. Now you know it’s true. They exist.

I mentioned earlier about the video source being reliable. There is some evidence that the owner(from Palestine)of Cup Foods might have had some animosity toward the police.

The owners son is a convicted felon who has been to prison. The business has been in trouble with the law in the past. Both the owner and son have criminal records.

This document will explain the situation better than I.

IN COURT OF APPEALS

Respondent city stayed revocation of relator’s business licenses subject to store closure for six months and compliance thereafter with several conditions. Relator argues that respondent’s decision is not supported by substantial evidence and that the sanction was arbitrary and capricious. Relator also argues that the administrative law judge (ALJ) abused her discretion by denying his motion to strike testimony concerning controlled drug buys. We conclude that there is substantial evidence to support respondent city’s finding of good cause for adverse license action against relator. In addition, because relator did not make a timely motion to strike, we conclude that the ALJ acted within her discretion by denying the motion. But because respondent deviated from the ALJ’s recommendations when imposing its sanction, without making findings explaining the reasons for doing so, we reverse and remand.

In 1989, relator Samir Abumayyaleh opened a convenience store at the northeast corner of 38th Street and Chicago Avenue South in Minneapolis. The store sold groceries and the usual convenience items. Eventually, relator added numerous goods and services to the store, including a delicatessen, cellular phone and pager sales, tobacco products, and off-sale 3.2 beer.

Respondent City of Minneapolis issued CUP Foods (Chicago Unbeatable Prices) four licenses: (1) grocery store; (2) food manufacturer; (3) tobacco dealer; and (4) off-sale 3.2 beer vendor. Respondent first issued the licenses in 1989 and each is subject to annual renewal. Relator’s family, including his father and two younger brothers, work at the store, but relator also employs other workers. Relator’s younger brother Nabil, known as “Billy,” one of the store employees, has a prior felony conviction for auto theft.

CUP Foods is located in a high-crime area of Minneapolis and, not surprisingly, experienced problems with loitering and drug activity in and around the store. In 1991, relator complained to respondent about the loitering problem, and at a city crime specialist’s recommendation, relator placed two yellow “no trespassing” signs outside his store. Respondent conditioned relator’s licenses on reduced hours of operation. On several occasions, however, the store remained open after the designated closing time.

In 1993, after receiving additional complaints about loitering and drug activity near CUP Foods, respondent scheduled a committee meeting to consider adverse license action. As a result of the meeting, relator agreed to remove public pay phones, hire off-duty police officers for security, reduce hours of operation, hire older employees for evening shifts, report drug activity to police, and remove signs blocking store windows. Relator understood that failure to comply with the agreed-on conditions could result in revocation, suspension, or non-renewal of his licenses. Relator complied with the conditions, including the employment of off-duty police officers as security guards. But approximately one-year later, relator discontinued their employment because of the cost and because “things got a lot better at the intersection.”

As time went on, however, the crime problem at 38th and Chicago became worse. In 1996, neighborhood residents formed a task force to improve safety and reduce drug-dealing activity in the neighborhood. In 1998, the number of complaints concerning CUP Foods prompted police community crime specialists to open a file on the store. Crime-prevention specialists visited CUP Foods and relator signed a Minneapolis “no trespassing” affidavit and received two new “no trespassing” signs. The specialists advised relator to call 911 to report trouble, and he and his employees did so.

Beginning in October 1998, police conducted surveillance of CUP Foods. Police observed loitering and hand-to-hand exchanges outside the store and in the store entryway. Using confidential informants, police made several “controlled buys” of either crack cocaine or apparent crack cocaine inside CUP Foods.

Based on the results of the controlled buys, police obtained a search warrant for CUP Foods and executed that warrant on November 18, 1998. Police recovered: stolen cell phones; a bullet-proof vest; live ammunition; a stolen bicycle; ephedrine, an ingredient in methamphetamine; glass tubing; baggies of what appeared to be crack cocaine (but later proved to lack cocaine base); postal scales; and three firearms. Police also observed bullet holes in a door. The state charged Nabil Abumayyaleh with unlawful possession of a firearm, but later dismissed that charge. Police did not link any of the stolen items to relator, and did not charge him with any crime.

Police continued to make controlled buys in CUP Foods during 1999. On one occasion, the participants completed a transaction in plain view of Nabil Abumayyaleh as he worked as a cashier. On November 9, 1999, a Minneapolis police officer recovered crack cocaine from a CUP Foods shelf during the course of answering a call reporting an armed man in the area.

In November 1999, the Hennepin County Attorney’s Office commenced a nuisance-abatement proceeding against CUP Foods. That proceeding was stayed pending the city’s resolution of appellant’s licensing issues because, on November 19, 1999, respondent filed a notice of hearing concerning all CUP Foods licenses. Respondent filed amended notices on February 25, 2000, and again on March 27, 2000.

An ALJ conducted evidentiary hearings on March 28, 30, and 31, and on May 5 and 15, 2000. Respondent presented testimony from police and neighbors, and argued for revocation of relator’s licenses. Relator presented favorable testimony from neighbors and customers, testified to his own compliance with recommendations, and explained that he, too, sought to end the criminal activity near the intersection.