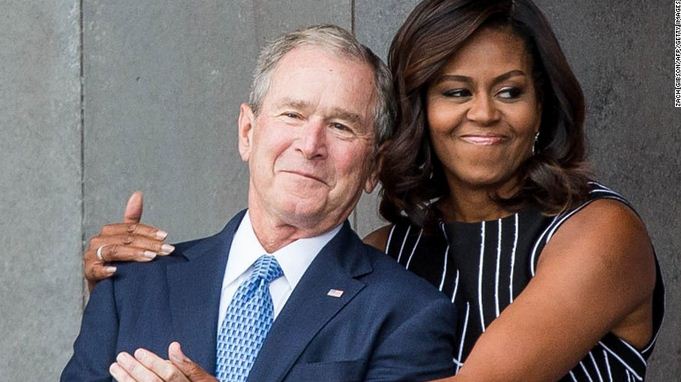 Friendship exists in many forms. It’s an easy relationship to form and it nurtures our sense of human connection like nothing else.

Although we may assume that all members of the political parties are at war with each other, it is not always so. In fact, some of them have such a cordial and respectful relationship between them, even us average people are amazed by it.

For instance, the friendship between former President George W. Bush and former First Lady Michelle Obama is not unknown to the world. As a matter of fact, their sweet exchange went viral and literally, caused a Tsunami on Twitter.

On the 5th of December 2018, at George G. H. Bush’s funeral at the Washington National Cathedral, his son George W. Bush walked into the Cathedral with his family members.

However, when greeting Michelle Obama, he slipped a candy out of his pocket to her, displaying a sweet gesture of his favoritism.

According to a Twitter post by Entertainment Tonight: “George W. Bush still has a sweet spot for Michelle Obama. The former president was spotted handing her a piece of candy during George H.W. Bush’s funeral service, and it clearly made the Obamas smile.”

A similar scenario was caught on camera in September 2018 at the former Senator John McCain’s funeral. George Bush, who was sitting next to Michelle Obama, passed a cough drop, Altoid, to her from the former First Lady and his wife, Laura Bush.

That footage also went viral over the internet.

Bush explained to People Magazine that “it was a genuine expression of affection” towards Michelle.

On the other hand, Michelle also clarified to NBC Today that “President Bush and I, we are forever seatmates because of protocol, and that’s how we sit at all the official functions. He’s my partner in crime at every major thing where all the ‘formers’ gather. So we’re together all the time. I love him to death. He’s a wonderful man, he’s a funny man.“

After the incident at former Senator McCain’s funeral, Bush has told USA Today that he’s had these old cough drops for a very long time in the little White House box.

Undoubtedly, this is an inside joke between the two chums, Bush and Michelle, that brought a little shine on days as gloom as funerals.

Hopefully, this small gesture of friendship between our political leaders teaches us about how to bring smiles for those we care the most about.

Marc is a content writer at FeedFond. He suffers from wanderlust and occasionally complains about life. To read more of his articles, visit FeedFond.com.