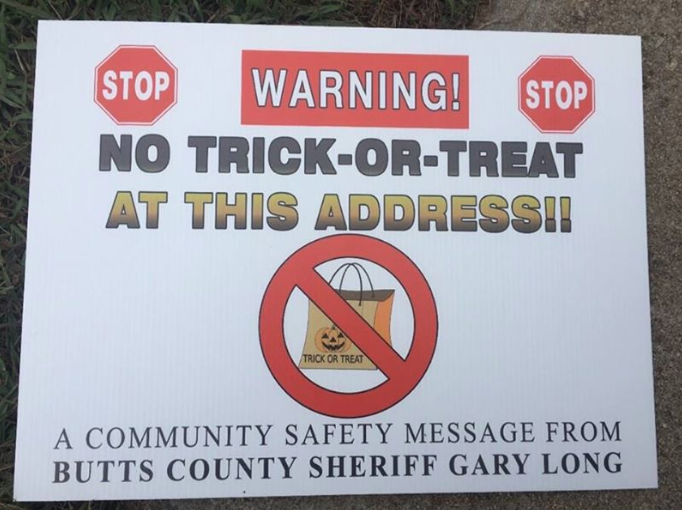 Butts County Sheriff Gary Long had the brilliant idea of posting “No Trick-or-Treat” signs at the homes of sex offenders to help protect children on Halloween.

The signs were put out last year without a hitch, but amid plans to duplicate the tactic this year, several sex offenders have sued the county, Fox News reported.

Sheriff Long’s intention is not to embarrass those convicted of sex crimes, but to keep kids safe. But the sex offenders claim their rights to free speech and privacy are being violated.

The signs read: “Warning! No Trick-or-Treat at this address!!”

“My office took precautions and placed signs indicating “No Trick or Treat” at each registered sex offender’s residence in the County. This was done to ensure the safety of our children,” Long said Monday in a Facebook post.

Mark Yurachek, the lead attorney for the petitioners, told the local Fox affiliate that the sheriff is stretching what the law allows.

“The law allows the sheriff to put a list of registered sex offenders at his office, at the courthouse, on the internet,” Yurachek told Fox 5 Atlanta. “It does not allow him to go door-to-door telling people you have a sex offender living next door to you.”

“I’m just not sure that this kind of action makes your kids any safer,” he added. “It just makes your constitutional rights less safe.”

The attorney described his clients as being “brave enough to not be afraid to let the public know that they are registered sex offenders,” even though the law doesn’t give them the option to not register.

He also said deputies are trespassing on private property to place the signs.

“The trespass stuff is pretty clear. They’re coming onto their property and putting the signs on there,” Yurachek said.

This is not the only county in Georgia going the extra mile to protect kids, according to Fox News. Monroe and Lamar counties also use the “No Trick-or-Treat” signs — in Monroe County, offenders were given the option of waiting in the lobby of the sheriff’s office during trick-or-treat hours on Halloween to avoid having signs posted at their homes.