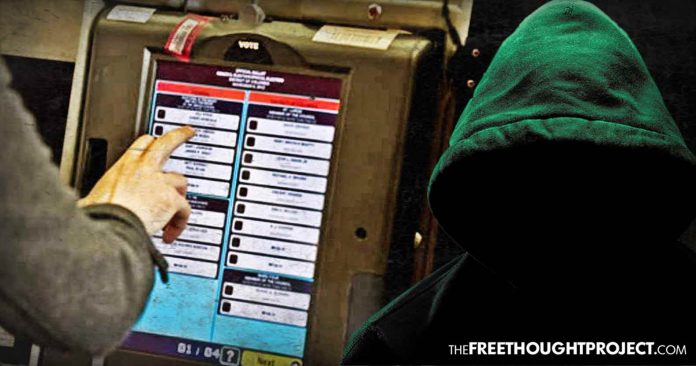 Savannah, GA — A rather shocking, but not surprising report this week out of Georgia reveals the unsettling state of America’s election and voting system. Voters in Georgia are now reporting that after they confirm their votes, they watch on the screen as their ballots mysteriously switch to the opposite candidate.

Later this month, a federal judge will hear the case against the Georgia government for their utter failure at maintaining sound election processes and their lack of maintaining a paper ballot record as well.

According to WSAV, the Secretary of State, Brian Kemp is facing a federal lawsuit because he’s reluctant to make the change before the upcoming November 6 election. While Kemp says he does agree the system needs updating, he’s fighting to delay it citing confusion and cost.

However, the voters and multiple lawmakers and citizens disagree. After all, what price tag could be associated with the cost of democracy?

“I don’t think there’s any question that we need to spend a little bit of extra to make sure we have safe and secure elections,” Representative Buddy Carter/(R) Georgia 1st District said.

In 2017, an investigation into Georgia’s voting system determined that it was in serious jeopardy. However, lawmakers failed to act and we are now seeing the inevitable results of such a failure.

Democrat candidate Lisa Ring told WSAV that she’s had voters tell her that they have watched their vote changing right in front of their eyes.

“We’ve heard reports all over the state of these old machines often not taking a persons vote, it’ll change. Change the vote. And, sometimes, if people don’t catch it, we don’t know if the vote is being recorded accurately,” said Ring.

On top of mysteriously changing votes is the fact that when voters show up at their assigned polling stations, they have been closed, or found that they have been expunged from the roll.

Georgia’s decaying voting system should serve as a wake up call to those who may still have faith in America’s ostensible system of democracy. While the investigation found problems in 2017, the Secretary of State has known about these severe flaws and even hacking attempts since 2016.

As the Free Thought Project reported during the 2016 election cycle, Georgia’s secretary of State Brian Kemp penned a letter to then DHS Secretary Jeh Johnson, asking the director if he was aware that DHS had attempted to hack into the server hosting the state’s voter registration database, and if so, why was DHS doing so. Weeks later, he received a reply, confirming that DHS had attempted to hack their systems a total of 10 times.

Atlanta’s WSB-TV spoke with Kemp at the time who said, “We need to know! We’re being told something that they think haven’t figured out yet, nobody’s really shown us how this happened.” The attacks came in February (2nd, 28th), May (23rd), and November (7th, 8th), totaling 10 in all, with the two latest attacks coming on the day before and the day of the presidential election.

As TFTP previously reported, a professor from Princeton University and a graduate student proved electronic voting machines in the U.S. remain astonishingly vulnerable to hackers — and they did it in under eight minutes.

Appel noted that the only “reasonably safe” voting method is paper ballots as they can be counted alongside the electronic tally. However, crucial swing states, as Appel notes, rely on more vulnerable paperless touchscreen voting which does not back up any of the numbers.

“Then whatever numbers the voting computer says at the close of the polls are completely under the control of the computer program in there,” Appel wrote in a blog post entitled “Security Against Election Hacking.” “If the computer is hacked, then the hacker gets to decide what numbers are reported. … All DRE (paperless touchscreen) voting computers are susceptible to this kind of hacking. This is our biggest problem.”