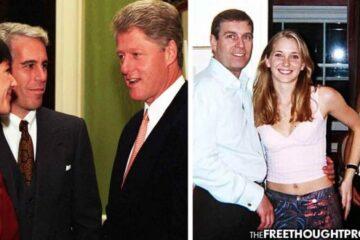 Ghislaine Maxwell, the British socialite and media heiress who became a confidante of disgraced financier Jeffrey Epstein, who was later accused of aiding the billionaire pedophile in trafficking children, is going to trial today. She will now face allegations spanning the course of 25 years in federal court in Manhattan on everything from participating in underage sex to trafficking young girls.“As Alleged, Ghislaine Maxwell Facilitated, Aided, And Participated In Acts Of Sexual Abuse Of Minors,” Said Acting U.S. Attorney Audrey Strauss. “Maxwell Enticed Minor Girls, Got Them To Trust Her, And Then Delivered Them Into The Trap That She And Jeffrey Epstein Had Set.”

The potential to expose elites connected to Maxwell and Epstein make this trial a possible pivotal moment in the movement to go after these people. However, as we’ve reported for years, every time it seems like this group of people may be exposed, people die, things get swept under the rug, or special treatment grants these predators a pass. The mainstream media, whether deliberate or not, also plays a role in keeping this information from you.

As one of the largest sex trafficking cases in history goes before the federal court, corporate media is bombarding us with news of the “Omicron Variant.”

In a comparison of Google News hits, “Omicron Variant” is receiving more than ten times the number of hits as “Ghislaine Maxwell.” This media blitz is in spite of the fact that the doctor who discovered it, who is a Covid-19 adviser to the South Africa government said that symptoms linked to the omicron coronavirus variant have been mild so far.

Barry Schoub, chairman of the Ministerial Advisory Committee on Vaccines, told Sky News on Sunday that while South Africa, which first identified the new variant, currently has 3,220 people with the coronavirus infection overall and while the variant does appear to be spreading rapidly, there’s been no real uptick in hospitalizations. His narrative is in direct contrast with that of the western mainstream media which is pumping out 24/7 fearmongering and doom.

The constant media fearmongering over the omicron variant is certainly convenient for those who wish to keep Ghislaine Maxwell’s trial out of the limelight.

As corporate media keeps Americans in a constant state of fear while simultaneously stoking hatred and divide, Maxwell’s trial has very little chance of transparency and coverage. Luckily, independent media has and will step in to report it as those in the mainstream continue to muddy the waters.

As TFTP has reported, since Epstein’s arrest, multiple revelations have come to light — not because of mainstream reporting — but thanks to a group of independent media outlets who have tirelessly dug into the case.

The revelations led to a myriad of connected insiders getting exposed for their roles in helping to cover up the abuse. In 2019, a federal judge made a bombshell ruling which stated that the prosecutors who worked under former Miami U.S. Attorney Alex Acosta—later appointed to Trump’s Labor Secretary—broke the law when handling the case of billionaire pedophile Jeffrey Epstein.

However, instead of accountability, Acosta was ruled to have used “poor judgement” and was allowed to step down from his position and quietly fade away without going to jail.

America now has another chance to expose even more people, but based on how this trial is unfolding so far, we may need to prepare for disappointment once more.

Back in March, Maxwell’s privilege began to show through as her requests to redact evidence were allowed. US District Judge Alison J. Nathan issued a ruling on redactions that Maxwell had asked for regarding transcripts the government filed under seal in February.

TRENDING: How The Federal Reserve Is Setting Up Trump For A Recession, A Housing Crisis And A Stock Market Crash

According to the judge, the evidence was too “sensation and impure” to reveal to the public.

“Those portions of the transcript, which were redacted in the civil matter, concern privacy interests and their disclosure would merely serve to cater to a ‘craving for that which is sensational and impure,’” Nathan wrote in the order.

After granting Maxwell her request, fast forward to this month and judge Nathan was nominated by President Joe Biden to the U.S. Court of Appeals for the Second Circuit.

Unlike the trial of Kyle Rittenhouse, which was blasted 24/7 from media outlets coast to coast, Maxwell’s trial will not be televised because it is a federal trial.

For now, Maxwell, 59, faces 80 years in prison on charges that she trafficked girls aged 14-17 for Epstein’s sexual pleasure. How exactly this entire scenario will play out, remains a mystery.

But you shouldn’t be worried about Maxwell at all. You need to worry about Omicron and Jussie Smollett — whose trial also happens to start today.