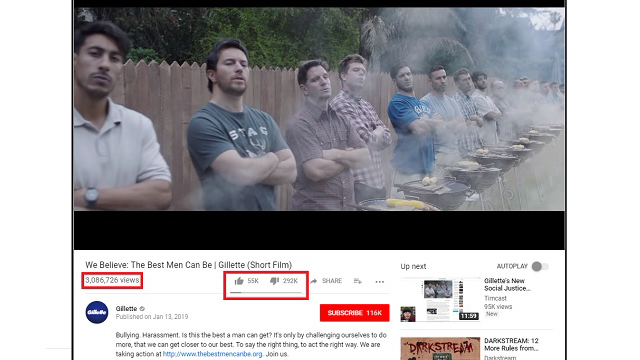 Gillette’s new ad bashing “toxic masculinity” is crashing and burning.
As of Tuesday morning, the ad had over 3 million views with 292,000 downvotes versus around 55,000 upvotes.

Proctor & Gamble is urging men to shave their “toxic masculinity” in a new ad for Gillette razors. The ad shows men fighting, cooking barbecue, and verbally harassing women, interspersed with news reports about the #MeToo movement.

A new ad from P&G razor brand Gillette encourages men to reexamine themselves and the way that they raise young boys. The ad, which is called “We Believe: The Best Men Can Be,” is essentially a two-minute broad generalization about the way that men act and think.

In a comment to the Wall Street Journal, Pankaj Bhalla, Gillette’s brand director, said that the advertisement is a meditation on the changes that men must make in America. “This is an important conversation happening, and as a company that encourages men to be their best, we feel compelled to both address it and take action of our own,” Bhalla said. “We are taking a realistic look at what’s happening today, and aiming to inspire change by acknowledging that the old saying ‘Boys Will Be Boys’ is not an excuse. We want to hold ourselves to a higher standard, and hope all the men we serve will come along on that journey to find our ‘best’ together.”

I’m sure this is just a coincidence:

The comments on YouTube are almost uniformly negative and people say they’re getting deleted at a rapid pace.

This was the top comment at one point and Gillette even “liked” it themselves before later reversing their decision: Many memes were had:

Gillette’s ad is an interesting contrast with this propaganda video on catcalling from 2014 (which was accused of racism as almost none of the “catcallers” were white):

The producer, Rob Bliss, responded to the controversy by saying, as Slate reported: “‘We got a fair amount of white guys, but for whatever reason, a lot of what they said was in passing, or off camera,’ or was ruined by a siren or other noise.”

No doubt. This Gillette ad was just reflecting that unseen epidemic!

While attacking your target demographic with propaganda is not the best business move, these megacorporations have shown for years now they care more about pushing the agenda than maximizing profits.

UPDATE: The ad is working!